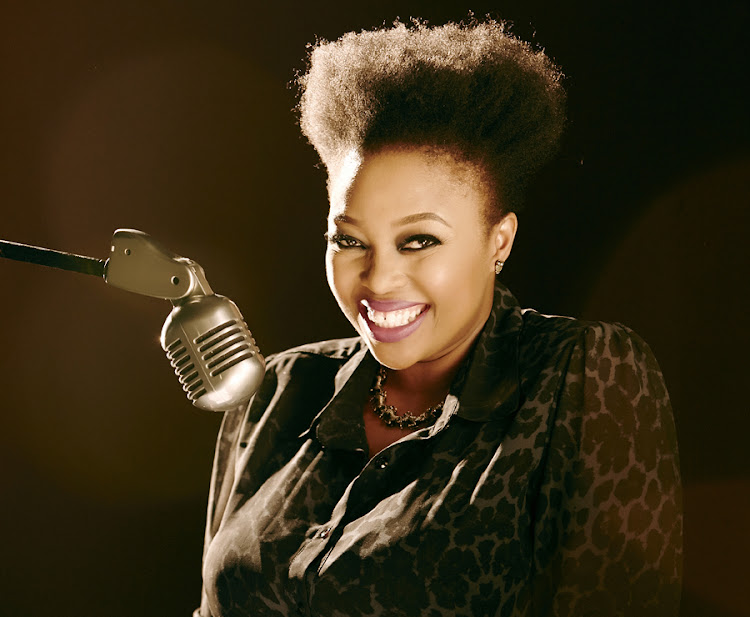 TV and radio personality Relebogile Mabotja went into anaphylactic shock in a Johannesburg restaurant this week and had to be rushed to hospital after being served a meal containing nuts‚ despite informing the waiter that she was highly allergic.

“I repeatedly asked the waiter if there were nuts in my meal.. he was irritated by my persistence‚” the 702 radio producer and morning show host said when she took to Twitter on Friday morning to relate her ordeal at Col’Cacchio at Emperor’s Palace on Tuesday.

“I then insisted he ask the chef because I am highly allergic. I was told there are definitely no nuts.”

But after just two bites something didn’t feel right‚ she said. Again she asked about nuts‚ and again the waiter‚ Wynand‚ insisted there were none in the Giardino salad she had ordered.

“I asked him to check if there was pesto. Again the answer was no.” 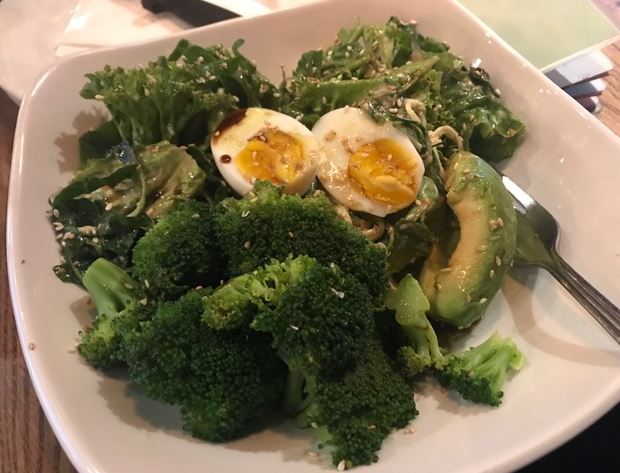 At that point Mabotja asked for the chef. “By this point they were annoyed as it seemed I was being difficult…but I knew there were nuts as I know my body.”

Finally‚ the staff admitted that there was pesto in the dressing described on the menu as “truffle yuzu dressing”.

“Within minutes I was battling to breathe and in Emperor’s Palace clinic. They were unable to stabilise me so an ambulance was called to take me to Arwyp private hospital‚” she said. She was discharged that evening.

Mabotja said she kept quiet about the incident for a few days‚ waiting to see if head office contacted her with an apology‚ but decided to go public on Friday when that didn’t happen.

“I am so disappointed at the lack of follow-up and training of staff on the seriousness of anaphylactic shock. I could have died.” 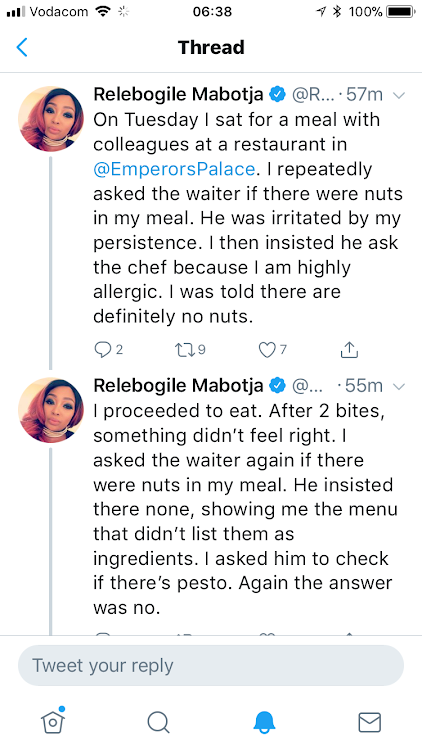 Radio personality Lebo Mabotja was rushed to hospital after eating a salad with dressing containing nuts after warning that she has a severe nut allergy.
Image: SUPPLIED

She is now demanding that the restaurant franchise issue a public apology‚ compensate her for the Emperor’s Palace store’s negligence‚ trains all Col’Cacchio staff countrywide on the seriousness of food allergies‚ gives a donation to a charity and embarks on a general food allergies awareness campaign.

The day after the incident‚ the waiter texted Mabotja to ask how she was doing‚ and she had a call from restaurant manager Reggie‚ but there had been no follow-up from head office offering to pay her medical expenses‚ no offer of compensation and no public acknowledgement of wrongdoing‚ she said. Not until she let rip on Twitter this morning.

“We are dismayed to read this‚ our absolute sincerest apologies. We are speaking with our head office immediately. Please may we have your contact information…to speed the process up. We look forward to resolving this.”

Contacted by TimesLIVE this morning for comment‚ store manager Reggie refused to reveal his surname and said he would call back. He failed to do so and subsequent calls went to voicemail.

“With some people it is so serious they die immediately after eating nuts. Luckily most are brought back from the brink of death‚” he said.

The South African hospitality industry’s awareness of the seriousness of nut allergies varied from dismal to very good‚ he said. “The big restaurant chains are usually more attuned to it.”