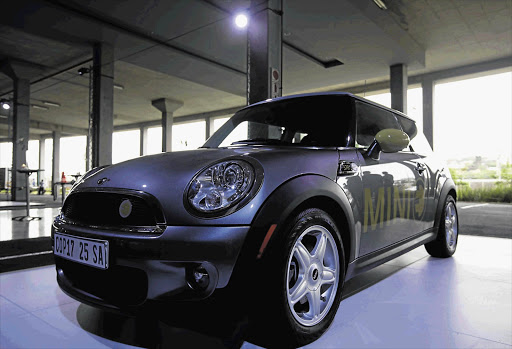 The electronic Mini E from BMW at its launch at the Moses Mabhida stadium in Durban yesterday.
Image: TEBOGO LETSIE

The car is not identical to its petrol-powered counterparts because it has to haul a lithium-ion battery pack, which takes up so much room that the Mini E is forced to ditch the back seat to accommodate it.

The car comes with a special charging adapter installed at an owner's home, which recharges the Mini E in just over two hours.

It also can plug into a standard wall socket. While the car can only reach a miserly 40km/h, it is a hot item, especially for celebrities in countries such as Germany, Japan and the US.

"Back in 2000, the BMW Group launched the Efficient Dynamics development strategy and today it delivers measurable benefits for the climate, resources and customers," said Bodo Donauer, managing director of BMW South Africa.

"The CO2 emissions of our new European vehicle fleet were reduced by more than 30% between 1995 and 2010 and, in the process, the BMW Group has been named the world's most sustainable automobile company for the past seven years by the Dow Jones Sustainability Indexes."

Thomas Becker, BMW vice-president, said that, by 2030 more than 60% of the world's population will live in cities and reducing emissions is the only option.

The Mini E would be available in South Africa soon.