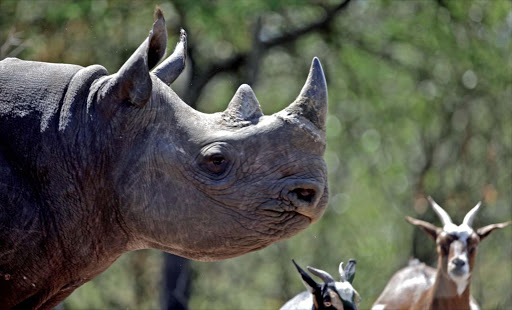 A two-month old rhino was hacked at least 18 times with axes and machetes when she got too close to poachers cutting off her slain mother's horn in South Africa, a conservation NGO said.

"The poor baby had obviously tried to return to its mother while the poachers were removing her horn and they slashed at her face with a panga and an axe repeatedly in order to chase her away," said Karen Trendler of the Endangered Wildlife Trust.

The baby rhino had "18 very deep lacerations across her face, one which cuts right through her stump and the other through her skull," but was said to be "doing remarkably well".

Poachers slaughtered a record 668 rhinos in South Africa last year as demand on the Asian black market for their horns continued to surge.

Some think the material, which is of the same material as human nails, has medicinal values.

Those claims have been widely discredited.

The female calf is being cared for at a special orphanage for baby rhinos near Mokopane 250 kilometres north of Pretoria, Trendler told AFP.