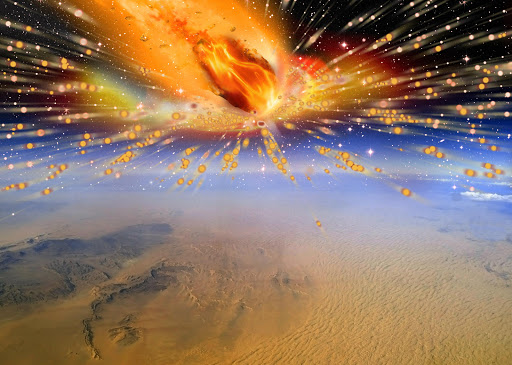 An artist’s rendition of the comet exploding in Earth’s atmosphere above Egypt
Image: Terry Bakker, Wits

Millions of years ago a comet exploded in Earth's atmosphere, raining fiery death on all life below, according to scientists.

According to the research by local scientists, to be presented in a public lecture at the University of the Witwatersrand this week, the comet entered the atmosphere above Egypt about 28 million years ago, heating up the sand beneath it to about 2 000 degrees Celsius and turning it into the yellow silica glass that lies scattered over 6 000 square kilometres of the Sahara.

One specimen was found to have been polished into a yellow brown scarab on Tutankhamun's brooch.

The explosion hit the earth so hard it formed microscopic diamonds.

"Comets always visit our skies - they're these dirty snowballs of ice mixed with dust - but never before in history has material from a comet ever been found on Earth," Professor David Block of Wits University said in a press release.

The scientists realised that this is what happened thanks to the discovery of a small black pebble a year earlier by an Egyptian geologist amongst the silica glass. With the aide of chemical analysis, the authors came to the conclusion that it represented a comet nucleus, rather than an unusual type of meteorite.

According to the university, the discovery provides the first definitive proof of a comet hitting the earth, and may also help us unlock some secrets of how our solar system formed.

"The team's research will be published in the journal Earth and Planetary Science Letter and was conducted by a collaboration of geoscientists, physicists and astronomers including Block, lead author Professor Jan Kramers of the University of Johannesburg, Dr Marco Andreoli of the South African Nuclear Energy Corporation, and Chris Harris of the University of Cape Town,"according to the statement.

You can read more about the comet at Wits.ac.za