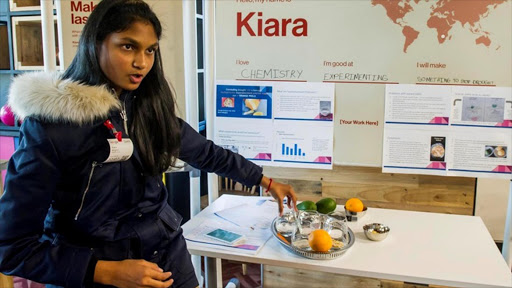 Johannesburg teenager Kiara Nirghin's project on using fruit to combat drought has earned her the grand prize award at the Google Science Fair.

Some of the brightest young scientists around the world converged at Googleplex in Mountain View for the sixth annual awards‚ which took place on Tuesday at Google headquarters in California.

Nirghin‚ 16‚ a Grade 11 pupil at St Martin's School‚ based her project on a natural super-absorbent polymer that allows soil to retain massive amounts of water. It won her $50 000 (R677 357) in scholarship funding.

The budding scientist was not immediately available for comment.

The Google Science Fair is a global online science and technology competition open to individuals and teams from ages 13 to 18.

During her research‚ which she worked on for about two months‚ she found that most citrus fruit contained naturally occurring polymers.

Orange peels contain 64% of polysaccharides‚ making them a candidate as a biodegradable polymer.

She experimented with ultraviolet light and heat and added natural oil found in avocado peels to boiled orange peels. After 45 days‚ her experiments showed that the mixture could absorb 76.1% of water‚ supporting her hypothesis that it could increase soil moisture.

Chemical absorbents are not biodegradable and sell at around R28 000 a ton. Kiara’s orange peel and avocado mix could be produced at R848 a ton.