'That was a tough one': SA's Lewis Pugh after latest Arctic ice swim 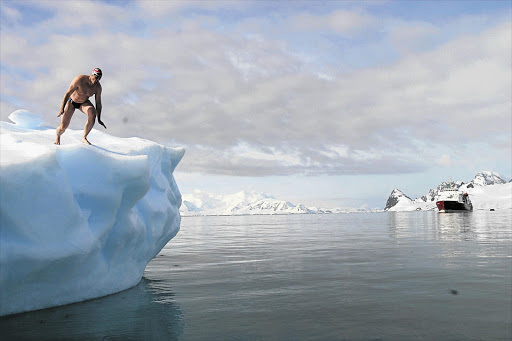 South African activist Lewis Pugh swam 1km alongside the edge of the Arctic sea ice on Saturday to highlight what he called “runaway climate change”.

The swim in minus 0.5C water lasted 22 minutes — much longer than the 17½ minutes Pugh expected. Two hours after being hauled out of the water he tweeted: “That was a tough one.”

Pugh did the swim to highlight the extent of sea ice loss. Before diving into the water clad in nothing but a Speedo and a swimming cap‚ he tweeted: “People have often said to me‚ ‘You must be mad to swim there.’ But I feel like the rest of the world is mad‚ and I am the sane one.”

Writing in his blog on Thursday‚ Pugh reflected on his first North Pole swims a decade ago. “I was attempting to become the first person to complete a long-distance swim in minus 1.7°C waters. I had no idea whether I would make it to the end of the kilometre‚ and I was terrified‚” he said.

“Fear is the first thing I remember about the swim. The second is the feeling of looking across the ice and seeing patches of open water everywhere. Water‚ where there should have been sea ice. The fact that there was water at the North Pole in the first place was alarming‚ and I wanted the world to know about it.

“Now I’ve returned to the Arctic‚ once again with a sense of trepidation. I know I’ve changed in the intervening years‚ but the Arctic has changed even more.”

Pugh’s three swims on his latest expedition are to launch his Arctic Decade Campaign. “What do we need to do in the next 10 years to protect the Arctic?” he said.

“First and foremost we need governments‚ businesses and individuals to urgently reduce the levels of greenhouse gases in the atmosphere. I will also be calling on world leaders to not only implement the Paris Climate Agreement‚ but to go way beyond it.

“I am deeply shocked by what I am witnessing. I’ve been swimming amongst ice for 15 years. It’s a substance I know well. I am not a climate scientist‚ but what I am seeing looks like runaway climate change in the Arctic.

“This campaign is about finding and implementing urgent solutions. My hope is that when we look back on this Arctic Decade in years to come‚ we will celebrate it as a time in which we brought our beautiful planet‚ and this amazing region‚ back from the brink.”