Innovative system teaches pupils to grow their own food 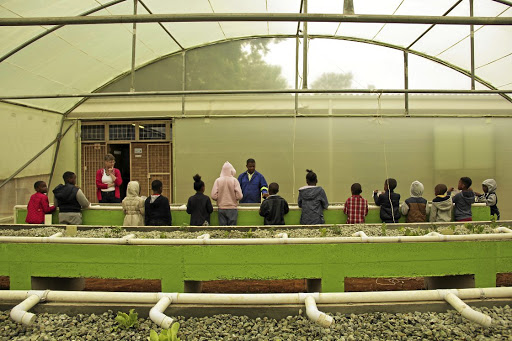 HOW IT'S DONE: Petrus Tsotetsi and Adoreé Louw, left, teach pupils at Laerskool Kempton Park about the importance of aquaponics and hydroponics.
Image: Mpumelelo Buthelezi

Janet Ogilvie and a colleague joke that they are guilty of "fish mass murder".

"In the eight years that we have been doing this, there have been unexpected circumstances," she said.

Ogilvie - who is involved in running a school aquaponics feeding scheme - works for Inmed SA, an NGO in partnership with Air Products SA that has helped set up aquaponics systems across the country.

Nutrient-rich water from fish tanks, which acts as a fertiliser, is sprayed over vegetable beds. The water, which drains through a special gravel system, is returned clean back to the fish tanks.

Ogilvie and her team are helping schools grow vegetables including tomatoes, beans, spinach, onions, rocket, lettuce and peppers to supplement their feeding  programmes.

On Friday scores of pupils from Laerskool Kempton Park lined up next to the 7m-long vegetable beds of the new aquaponics system. The beds are fed from three tanks filled with 1800 Tilapia fish.

The fish, once they grow to full size, will be used in the feeding scheme.

Ogilvie said it was vital to start teaching kids about aquaponics.

She said it was important to learn how to grow vegetables so that people could have access to healthy food.

School principal Piet du Toit said 250 of his 650 pupils were on the feeding scheme.

The commercial scale system, which can produce about four tons of food, costs about R1.2-million to install.

Inmed SA, which began its aquaponics system in 2010, had its first installation at Carel de Wet Technical High School in Vanderbijlpark in 2011.