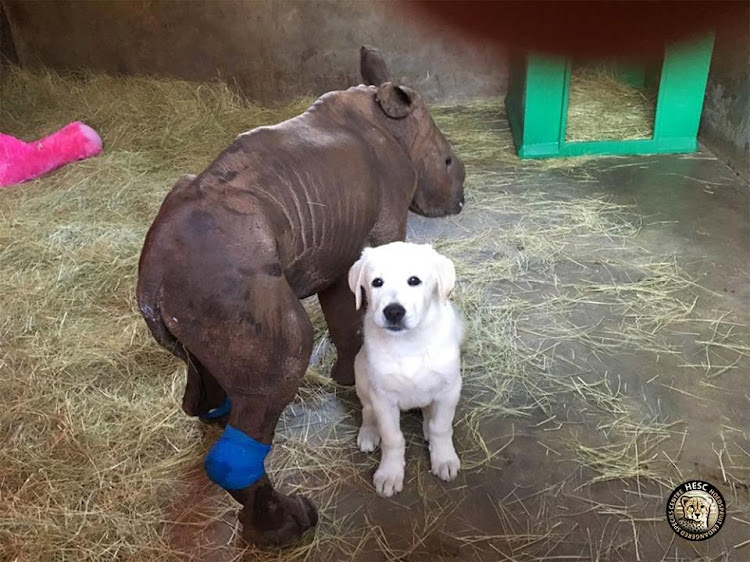 INSEPARABLE PAIR: Esme the baby rhino and David the Anatolian Shepherd dog have a tight bond since she arrived at the Hoedspruit Endangered Species Centre in Limpopo
Image: FACEBOOK

David and Esme snuggle‚ follow each other around and he's her fierce protector.

He’s an Anatolian Shepherd dog and she's a rhino calf.

The duo have become inseparable since a dehydrated Esme was brought to Hoedspruit Endangered Species Centre in Limpopo recently to be nursed back to health.

Lente Roode‚ founder of the centre‚ said the dog and baby rhino‚ estimated to be a month old‚ had developed “quite a bond”‚ since she arrived a few weeks ago.

“Thankfully‚ this time it was not a case of poaching; however‚ she needed to be rescued immediately from a situation that could have potentially turned dire without human intervention.

“A game farm contacted HESC‚ after they had noticed that the calf was not putting on weight but instead losing weight even though she was suckling from her mother.

“Our team drove to the reserve where the rhinos were. As soon as they arrived‚ the search for the mother and baby began. This was quite a challenge as the rhinos had disappeared into the bush‚ but emerged after hours of searching in the mid-afternoon sun.”

The calf was then brought to the centre for rehabilitation‚ where David‚ an Anatolian Shepherd was introduced to Esme‚ to keep her company and protect her.

The Anatolian Shepherd dog is a breed that’s been used by Turkish shepherds for thousands of years‚ as the first line of defence against predators.

“They are independent thinkers who need little direction to do their job. We are doing whatever we can to ensure the safety of our rhino‚” said Roode.

Since then they have formed a close bond and spend “every waking moment together”.

“Esme follows David around whenever they are let out of the boma. They both enjoy being in the sun. We are happy to see Esme doing well‚ and we are glad we could help this little one‚” said Roode.