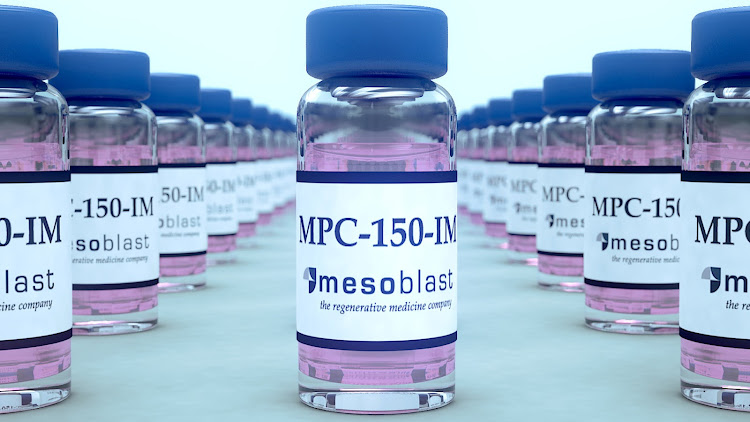 Australia's Mesoblast, with a market value of about $500-million, is attempting to alter advanced heart failure, a leading cause of hospitalisations and deaths and an enormous cost burden.
Image: Mesoblast/Handout via REUTERS

The early hope that stem cell therapy would make the paralysed walk, the blind see and cure diabetes have given way to a long list of failures, highlighted by early stem cell champion Geron Corp abandoning the field in 2011.

But two small companies, Athersys Inc and Mesoblast Ltd, are beginning final stage trials in hundreds of patients that they - along with loyal investors - say could change the course of devastating stroke and heart failure.

Both have overcome major hurdles to manufacturing stem cell treatments on a large scale that are off-the-shelf products derived from healthy donor bone marrow and do not face immune system rejection issues.

Cleveland-based Athersys, with a market value of about $200-million, demonstrated evidence in a midstage trial that its therapy may be able to expand the emergency treatment window for major strokes to up to 36 hours, compared with about four hours with current drugs, potentially allowing many more patients to avoid crippling disabilities.

Australia's Mesoblast, with a market value of about $500-million, is attempting to alter advanced heart failure, a leading cause of hospitalisations and deaths and an enormous cost burden.

They are among the farthest along in the stem cell industry at a time when Wall Street investors have focused on potentially big payoffs from immune-system based cancer therapies and rare disease treatments.

Perception of the field has also been hurt by unscrupulous actors selling unapproved, possibly unsterile cell therapies for everything from cancer to lung disease and ALS, prompting a US crackdown this past summer.

"The market tends to test these companies sometimes to the brink," said Tom Dobell, who manages a fund for UK-based M&G Investment Management that specialises in supporting promising companies during difficult periods. "We're comfortable that the progress that's going on is going to be worth it."

M&G is a long-time holder of Mesoblast, with about a 15 percent stake, and Athersys, with about 4 percent.

Athersys's experimental Multistem treatment was one of the first companies to be designated by the US Food and Drug Administration as a promising cell-based therapy with potential to address unmet needs for serious or life threatening conditions, potentially easing the approval process.

"The regenerative medicine space has been a tough road clinically and Athersys is one of the bright, shining stars," said Steven Martin, managing member of Chicago-based Aspire Capital and a long-time holder of Athersys shares.

Stem-cell tourism involving patients who travel to developing countries for treatment with unproven and potentially risky therapies should be more ...
News
4 years ago

Athersys believes Multistem - 1.2-billion cells delivered via simple intravenous drip - dampens the immune system's hyper-inflammatory reaction to signals that the brain is under attack during stroke, and promotes healing.

The body's reaction to stroke may also severely deplete the immune system, leading to later complications beyond paralysis or speech impairment. In the Phase II trial, Multistem patients had significantly fewer incidents of pneumonia, acute pulmonary distress and other serious complications.

That trial, attempting to extend the treatment window to 48 hours, failed. But researchers were encouraged by patients treated up to 36 hours post stroke.

The company plans to begin a 300-patient Phase III study of Multistem in early 2018, aiming for US and European approval after regulators agreed to protocols for one pivotal trial.

"Of the many entities in this field, they have been careful and deliberate in their movement forward" and do not engage in "overwrought claims," said Dr. S. Thomas Carmichael, co-director of UCLA Broad Stem Cell Center, who was not involved in Multistem trials.

An ongoing Phase III trial of 600 advanced heart failure patients is currently enrolling. Reducing the severity of a patient's heart failure "would give them back potentially many years of good quality life," said Mesoblast CEO Silviu Itescu.

Timothy Ray Brown — the only known person to be cured of HIV — thought a cure was science fiction when his doctor raised the idea a decade ago.
News
4 years ago

Independent monitors who oversee and can halt blinded clinical trials for futility gave a green light to continue the Mesoblast study in April after a review of the first 270 treated patients, suggesting the therapy might be effective.

A separate US National Institutes of Health-sponsored Phase II study of 159 end-stage heart failure patients dependent on an implanted pumping assist device completed enrolment in September, with results expected in the first quarter of 2018.

Some 250,000 people in the United States alone have been diagnosed with most serious class IV heart failure, and only about 9,000 receive a transplant or left ventricular assist device (LVAD) each year, Itescu said.

If such patients can recover enough to again rely on their own heart, said Dr. Joseph Woo, a heart surgeon at Stanford University and an investigator of the NIH trial, "this would be considered one of the big advances of this century."