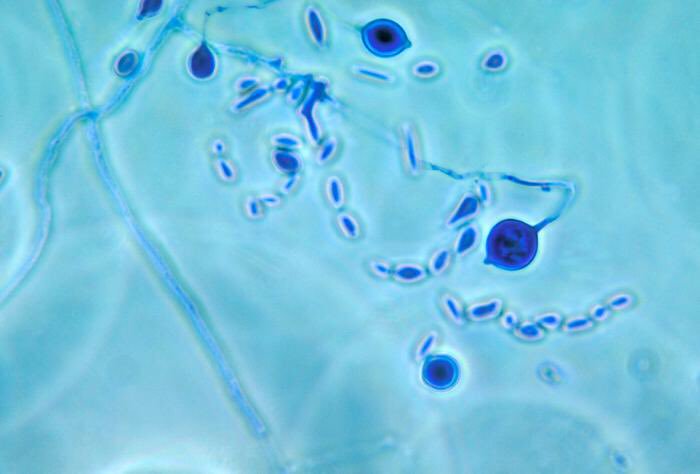 The fungus‚ Emergomyces africanus‚ kills half the people it infects.
Image: Journal of Clinical Microbiology

A mysterious new fungus‚ widespread in the Western Cape‚ kills half the people it infects.

The fungus‚ Emergomyces africanus‚ was detected in soil samples at 11 locations as far apart as Simon’s Town‚ Malmesbury and Kleinmond. It was also found in 10% of air samples collected over 50 weeks on a rooftop in Bellville‚ in Cape Town’s northern suburbs.

Infectious diseases expert Ilan Schwartz‚ from the University of Manitoba in Canada‚ has just published two papers on the fungus‚ which was identified only in 2013.

Writing in the journal PLOS Neglected Tropical Diseases‚ he said Emergomyces africanus was already recognised as the cause of the most frequently diagnosed dimorphic fungal infection in South Africa. Dimorphic fungi can exist in the form of moulds and filaments‚ and as yeast.

Most cases were in the Western Cape‚ but they were also reported in five other provinces - and in Lesotho. The fungus posed a particular threat to immunocompromised patients‚ particularly those with HIV.

“In Cape Town‚ a clinical and laboratory surveillance study at public hospitals over a 15-month period identified 14 cases of culture-proven emergomycosis‚” Schwartz wrote.

“[This] is an opportunistic infection of immunocompromised hosts. One patient was a kidney transplant recipient and the remainder [of cases] have occurred in patients with advanced HIV infection.

“Patients most commonly present with widespread skin lesions and pulmonary disease. The reported case-fatality ratio is 50%.”

Working with an international team‚ including scientists from the universities of Cape Town and Stellenbosch‚ Schwartz tested 60 soil samples‚ mostly from the Western Cape‚ and 18 were found to be positive.

“Although an environmental reservoir for Emergomyces africanus has not been established‚ soil is presumed to harbour the mycelial [thread-like] phase‚” Schwartz wrote in the journal Emerging Infectious Diseases.

Many aspects of this organism remain unknown‚ including its ecologic niche

“Many aspects of this organism remain unknown‚ including its ecologic niche.”

Between September 2015 and August 2016‚ the scientists also placed a spore trap on the roof of a Bellville building owned by the City of Cape Town. Molecular analysis in the aerobiology lab at the University of Tulsa in the US found Emergomyces africanus on 34 days over 11 weeks.

This was worrying‚said Schwartz‚ because “infection is presumed to occur via inhalation of infectious propagules [parts of the plant]. That propagules were frequently detected in an urban setting suggests that exposure is common in Cape Town [and perhaps other areas where infection has been diagnosed]”.

Schwartz said there were too few positive samples to conclusively link the fungus to changes in the weather‚ but added: “It is possible that cooler temperatures [during winter and spring] and rainfall coincided with Emergomyces africanus in the air samples.”