Scales of justice come down heavily against foreign lizard poachers 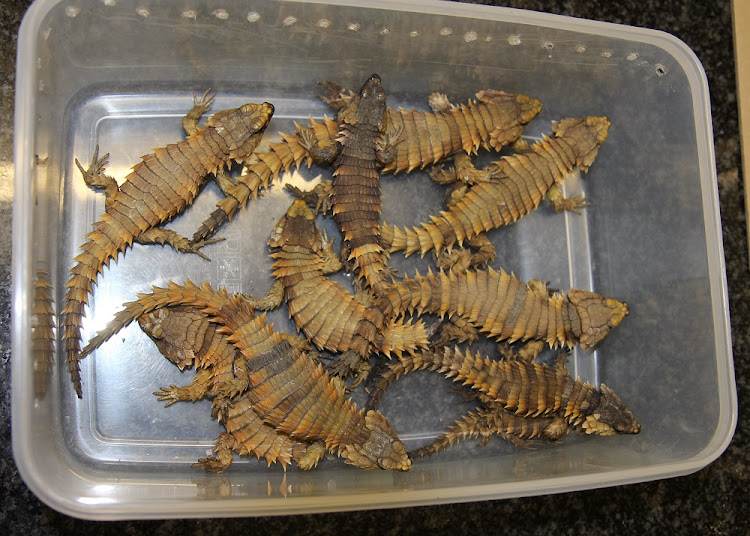 Some of the 48 Armadillo girdled lizards recovered from Koji Ikoma.
Image: Cape Nature

A man who had travelled to South Africa from Japan to make off with precious “items” found himself in a sticky situation when he saw a police roadblock.

Koji Ikoma threw his cooler bag out of the car window while police gave chase near Malmesbury in the Western Cape. When police opened the bag‚ they found 48 armadillo girdled lizards inside.

After an investigation by CapeNature and the police‚ Ikoma confessed to collecting‚ possessing and transporting the lizards. The crimes‚ he said‚ were committed for “financial gain”.

He now faces 13 years behind bars or a R1-million fine after being sentenced this week.

Ikoma was arrested in November 2017‚ and a month later another Japanese man was caught for the same offence.

Takasha Handa was picking his way through the veld near Nuwerus‚ also on the hunt for armadillo girdled lizards. He was caught with five of the creatures‚ and this week he was sentenced to six months in prison or a fine of R300 000.

In March this year‚ Germans Leo Träger and Holger Pelz were arrested by Lutzville police with 21 armadillo girdled lizards‚ two Karoo girdled lizards and 3 peers nama lizards. They had no written permission from the landowner‚ and were also sentenced this week to a R250 000 fine or two years’ imprisonment.

“CapeNature welcomes the sentences handed down by the Bellville Regional Court‚” said CapeNature’s CEO‚ Razeena Omar. “We would also like to congratulate all parties that participated in achieving this result. This teamwork again delivers a blow to biodiversity criminals who are exploiting the biota of the Western Cape.”

- The armadillo girdled lizard is brown with a yellow underbelly. It grows to a maximum length of 10.5cm. It is endemic to the Succulent Karoo biome in the Northern Cape and the Western Cape and lives in social groups of up to 30 to 60 individuals of all ages.

The lizard takes its tail in its mouth and rolls into a ball when frightened. In this shape‚ it is protected from predators by the thick‚ squarish scales along its back and the spines on its tail. The female gives birth to one or two live young‚ and the species is one of the few lizards that does not lay eggs.

Armadillo girdled lizards were classified as vulnerable until 1996‚ but have since been downgraded to least concern‚ mainly because the pet trade is now illegal.

There has been a dramatic drop in the number of rhino poaching cases on privately owned game reserves in KwaZulu-Natal following an intensive ...
News
4 years ago

Captive-bred lions at a recently exposed 'lion-abattoir' in the Free State are waiting for their fate to be decided as both the Departments of ...
News
4 years ago