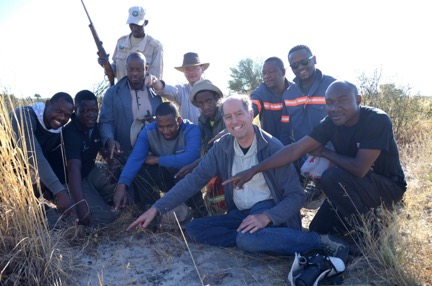 Scientists from Wits University and colleagues from Botswana and other countries found the meteorite after a long search over a wide area.
Image: Botswana International University of Science and Technology

A meteorite that was part of a fireball which streaked across the sky in June has been recovered in the Central Kalahari Game Reserve in Botswana.

Scientists from Wits University and colleagues from Botswana and other countries made history when they found the meteorite after a difficult search covering a vast area of terrain.

Fragments of an asteroid collided with Earth on June 2‚ creating a meteor fireball which detonated over Botswana a few seconds after entering the atmosphere.

The event was captured on security cameras in South Africa and Botswana‚ with many witnesses also seeing signs of it with the naked eye.

The asteroid - called 2018 LA - was discovered in space eight hours before hitting Earth. The fragments then scattered over a “wide area‚ blown by the wind while falling down”‚ say the scientists.

This is only the third time in history that an asteroid inbound to hit Earth was detected early and only the second time that fragments of it could be recovered.

Peter Jenniskens‚ from the SETI Institute in California‚ and colleagues found that calculations of the fall area were enough to warrant a search expedition.

And so it began.

Professor Roger Gibson from the Wits School of Geosciences‚ along with other researchers from all over the world and the Botswana University of Science and Technology (BUIST)‚ began the hunt.

“The biggest uncertainty we faced was to determine where exactly the meteorites fell‚” said Jenniskens‚ who travelled to Botswana to assist in the search.

After several days of “walking and scouring a landscape of sand‚ thick tall grass‚ shrubs and thorn bushes”‚ the meteorite was found. 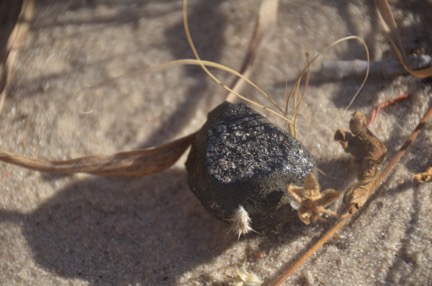 The meteorite from asteroid 2018 LA.
Image: Botswana International University of Science and Technology

BUIST’s Professor Alexander Proyer said‚ “Searching for a meteorite in 200 square kilometres of uncharted wild is already a complex operation‚ and when you do so in a park teeming with elephants‚ lions and snakes‚ it makes your task even a bit more challenging.”

According to Mohutsiwa Gabadirwe‚ senior curator of the Botswana Geoscience Institute‚ “Meteorites are protected under Botswana law. This meteorite is a priceless piece of rock that the people of Botswana will want to enjoy seeing on display for generations to come.”

Future study of the meteorite may reveal where dangerous asteroids of this type originate in the asteroid belt.

The meteorite samples will be curated by the Botswana National Museum and investigated further by a research consortium including scientists from Botswana‚ South Africa‚ Finland‚ and the USA.

Meteorite sighting ‘once in a lifetime experience’ for North West farmer

“It is an experience that you are only going to see once in your life and only comes your way once.”
News
3 years ago

What appears to be two meteorites were spotted striking parts of the North West on Saturday night.
News
3 years ago

Meteors - what you need to know

Are we being invaded by aliens?
News
3 years ago