WATCH | How African gorillas grieved when their mother died

Mountain gorillas groom their dead and even try to suckle from them, according to new research from the central African highlands.

Zoologists also saw gorillas kicking and attempting to feed the corpses of animals they were close to, adding gorillas to the list of animals found to grieve their dead.

"Our observations were surprising," said researchers from the Dian Fossey Gorilla Fund and universities in the US and Europe. "The affiliative/investigative behaviours may partially be explained by a general curiosity with death."

The gorillas' reactions to the deaths of individuals with which they shared a close bond also indicated distress over death, they said, but they were not sure it was a common response.

Reporting their findings in PeerJ - the Journal of Life and Environmental Sciences, the scientists found that strong reactions to death may only occur towards dominant adult gorillas in social groups, or by the offspring of the deceased. 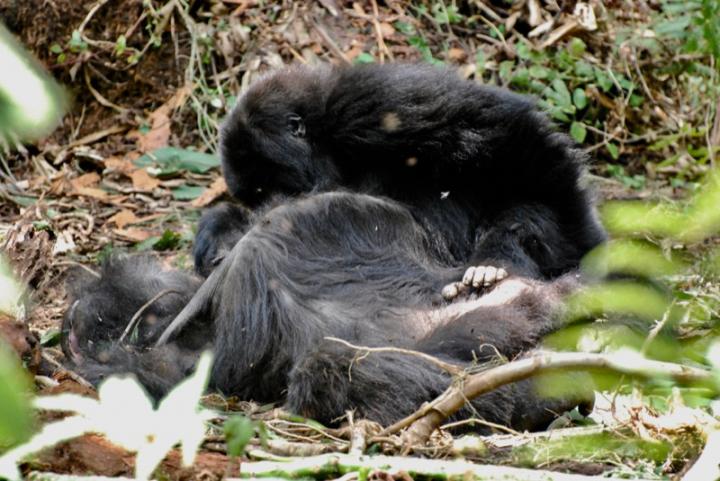 They described in detail the death of Tuck, a dominant adult female gorilla from the Volcanoes National Park in Rwanda.

After Tuck died in September 2010 at the age of 38, her sons Segasira and Urwibutso displayed heartbroken reactions.

Segasira nested with his mother’s corpse and remained in close contact with her body throughout the morning. He was observed sitting on her, staring at her face, grooming her, gently moving her head and even attempting to suckle from her.

Urwibutso exhibited a more aggressive reaction. He was seen beating his chest and kicking the body, a possible attempt at reviving it. He made what scientists described as "hooting vocalisations" while dragging vegetation towards the area where his mother died.

The behaviour of these mourning gorillas resembled that of other pack animals who are known to show similar signs of grief towards their dead, such as elephants and wolves.

A study on how death affects a wolf pack found a distinct behaviour change. The pack's howls changed from strong and piercing to sorrowful and eerie. When they were near the body, the wolves hung their heads and tails.

How you could save rare animals by simply going on holiday

If communities can be shown that tourism pays, there is hope for saving the world's endangered species, says Richard Madden
Lifestyle
3 years ago