Spekboom: Truly a tree of life 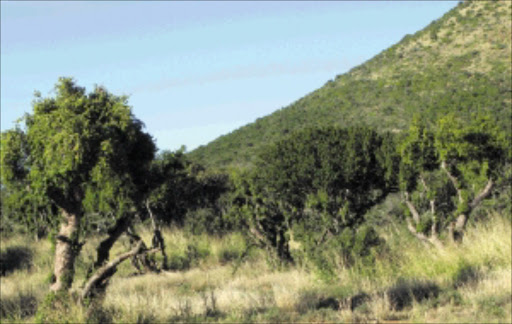 Replanting spekboom is labour intensive, creates jobs and is a source of income for rural communities Picture: JACKIE MAY

Driving through Eastern Cape, you'll notice a bushlike plant with a thick stem and small, fleshy green leaves that clump together in threes, like a succulent version of clover. It seems rather unassuming for a plant with a growing reputation for saving the planet.

Spekboom is native to Eastern Cape. It grows particularly in the Addo Elephant Park area, outside Port Elizabeth, but it once covered hundreds of thousands of hectares in that area.

Now the humble tree is being replanted hectares at a time because of its ability to capture carbon, restore natural ecosystems and alleviate poverty.

From government restoration programmes to schoolyard educational projects, spekboom has become a symbol for carbon emission reduction and climate change awareness. It even has its own Facebook page.

Dr Anthony Mills from the Research Restoration Group has been investigating how the plant manages to store more than four tons of carbon per hectare, creating what is known as a carbon sink in large plantations. In other words, 10 hectares of spekboom is equivalent to taking 26 cars off the road for a year.

This ability to mop up carbon from the atmosphere and reduce our greenhouse gas emissions could allow South African farmers to tap into controversial carbon trading markets worth tens of billions of dollars.

R3G scientists are excited about the implications for South Africa to generate carbon credits.

The carbon market allows businesses to trade and sell carbon allowances to attain compliance with their emission reduction targets under the Kyoto Protocol.

The Eastern Cape Parks and Tourism Agency announced that its income had surged by 300% within nine months of having started the implementation of a spekboom rehabilitation strategy in the province's reserves.

While carbon trading is criticised as "green cover" for corporations to continue polluting while creating the appearance of progress, Sybert Liebenberg, acting head of authority at the Eastern Cape Parks and Tourism Agency, said: "We can use our parks and infrastructure to deliver ecological services. Payment for these services can lead to a huge economic injection in the province. In South Africa, this has not been done before on this scale."

Pilot plots have been planted in eastern Baviaanskloof, in the Cambria Region at Goedehoop, Rooihoek, and in the western kloofs of Baviaans-kloof Mega Reserve. These projects are essentially building a business model for thicket rehabilitation and carbon farming as an alternative land use in Eastern Cape.

Also known as igwanishe, olifantskos or by its latin name, Porticularia afra, spekboom has other beneficial qualities.

It improves soil quality, reduces erosion and stimulates a return of biodiversity in the area because of its soil-binding and shading nature.

The replanting of spekboom is labour-intensive and can create tens of thousands of jobs and a new source of income for rural communities.

Spekboom's unique ability is that it is able to switch its photosynthetic mechanism from that of a rainforest plant in wet conditions to that of a desert cactus in semi-arid conditions, making it highly efficient for its environment.