Lion bones off to Asia 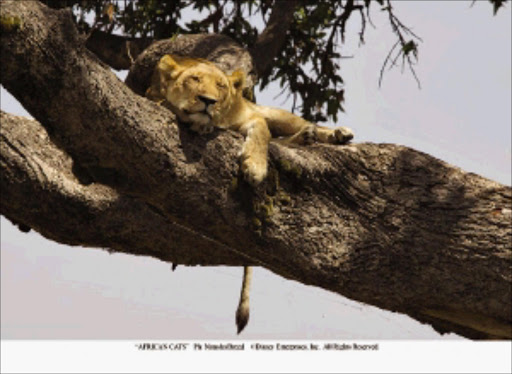 Scenes from African Cats, Disney's latest documentary, include Layla chilling out in a tree, left; and Sita with her litter, opposite. Filmmaker Keith Scholey says the documentary focuses on the two mothers and their mutual enemies - a gang of adult male lions and a pack of hyenas - and their courage in confronting their common problems

South Africa's lions are beginning to fall prey to the lucrative east Asian black market for wildlife products, with the government authorising the export of more than 200 carcasses to Laos.

Responses to DA MP Gareth Morgan's parliamentary questions by Minister of Water and Environmental Affairs Edna Molewa show that permits for the export of 156 lion bones were granted in 2009, increasing to 1623 in 2010. North West dominates the trade, having exported 92 carcasses in 2009 and 235 in 2010.

Of these, 256 were exported to Laos, known to be the operating base of Xaysavang Trading Export-Import company, which has been linked, in media reports, to southeast Asian wildlife trafficking syndicate.

Last month The Times reported that two Thai men had been convicted of being in possession of 59 lion bones without a permit.

A week later, Chumlong Lemtongthai, the alleged kingpin of a rhino horn syndicate and director of Xaysavang, was arrested at the same home in Edenvale.

It has since emerged that Lemtongthai allegedly used Thai prostitutes to acquire permits for fake rhino hunts.

He is currently facing charges on 52 counts of contravening environmental and biodiversity laws.

His attempt to make a plea bargain with the state collapsed at the Kempton Park Regional Court on Friday.

Xaysavang has also been involved in shipping lion bones - which are used as a substitute for tiger bones, believed to have medicinal properties - to southeast Asia.

Yolan Friedmann, CEO of the Endangered Wildlife Trust, said that the market for lion bones was becoming bigger because tiger populations in southeast Asia are severely depleted and because of the recent recession.

"There's not a good enough market to come and shoot lions [in legal hunts], so game farmers are offering bones for sale," she said.

Friedmann said that provincial environment departments, which are responsible for issuing permits in relation to threatened and endangered species such as lion and rhino, were often under-staffed, corrupt and inefficient.

"By quietly supporting this ... the government is stimulating a grossly unethical trade in animal parts," she said.

Albi Modise, spokesman for the national Department of Environmental Affairs, yesterday referred questions about the issuing of permits to provincial departments.

Asked if any national investigation into the issuing of permits at a provincial level was being undertaken, Modise said Molewa was "considering all possible interventions to address the surge in rhino poaching.

"Her decisions will be based on consultation and information obtained through the studies initiated by the department."