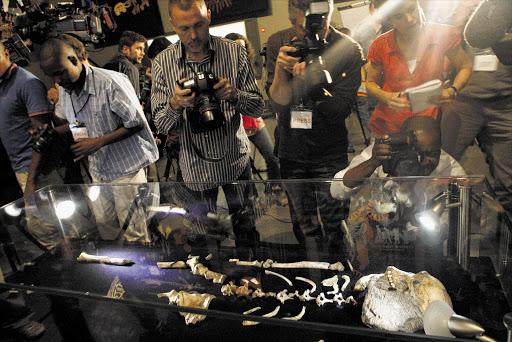 Fossils of a 2million-year-old Australopithecus sediba discovered at the Cradle of Humankind on display at the Origins Centre, at Wits University

New evidence about the two sets of fossilised skeletal remains found at the Cradle of Humankind suggests that they might be those of the ancestors of modern humans.

The fossils, of a female adult and of a male child (named Karabo), were unveiled last year as a new species, Australopithecus sediba.

They have been dated to 1.977million years ago.

Research leader and University of the Witwatersrand professor Lee Berger said: "The fossils demonstrate a surprisingly advanced but small brain, a very evolved hand with a long thumb like a human's, a very modern pelvis, but a foot and ankle shape never seen in any hominid species. It combines features of both apes and humans in one anatomical package."

The first fossils were discovered in 2008 by Berger's son, Matthew, who was nine at the time.

Since the discovery of the fossil female, who was in her late 20s, and of the male, who was between 10 and 13, a team of 80 researchers from around the world, based at Wits, has been studying them.

Today the journal Science published five research papers by the team about the brain, hands, feet, pelvis and age of the fossils.

The brain of the male child is the size of a grapefruit but, according to researcher Kris Carlson, it is "not consistent with a model of gradual brain enlargement" believed to account for the transition from the Australopithecus genus to Homo.

The bones of the woman's right hand show that she could have made stone tools and had an excellent ability to grip between her index finger and thumb, something unique to humans.

But research also shows that the hand was also used to climb trees.

The head of the hand research team, Tracy Kivell, of the department of human evolution at the Max Planck Institute for Evolutionary Anthropology, in Germany, said that "the hand is one of the very special features of human lineage. It is very different from the hand of the apes".

Apes have long fingers and short thumbs but this fossil has "a more human-like hand that has shortened fingers and a very long thumb," she said.

The ankle joint is similar to a human's but the heel is more ape-like.

Wits researcher Bernhard Zipfel said: "No ankle has ever been described with so many primitive and advanced features in one.

"It is very human-like [but also] very primitive," said Zipfel.

Researchers believe the two individuals not only climbed trees but also had a characteristic way of walking that differed to that of modern humans.

Though scientists found several human-like features in the fossils, Berger said the team had made the decision not to classify the fossils as human because of the contradictory evidence.

The fossil of the female, and a cast of that of Karabo, will be on display at Maropeng until September 26.