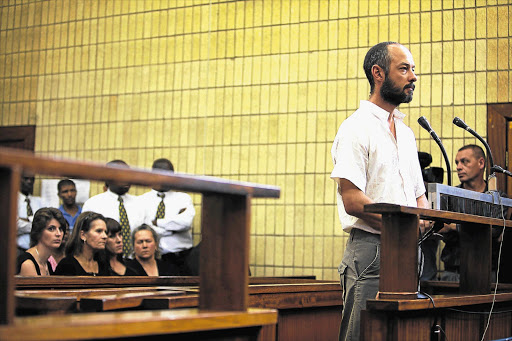 Tempers flared when the alleged Sunday Rapist appeared in court yesterday as the mother of one of the rapist's victims shouted after him as he walked back to the holding cells.

"You can look at me! It was my daughter!" screamed Louise de Waal's mother, Shireen, sitting in the front row of the public gallery with an older daughter, son-in-law and friend - all were dressed in black.

Louise, 16, was walking to Hoërskool Die Burger, in Roodepoort, western Johannesburg, with a friend in October when she was kidnapped at gunpoint. The friend was shoved out of the way. Louise was taken because her abductor "liked the way she looked".

Johannes Steyn - linked to 10 other sex attacks on teenage girls - raped Louise on a farm in the Magaliesberg, west of Johannesburg, then murdered her and burned her body.

Someone from the gallery shouted "vark!" (pig) at the tall 35-year-old bearded man whom the police say has confessed to being the Sunday Rapist.

Johannes Steyn was not asked to plead. Dressed in a white shirt and khaki trousers, a balding Steyn did not cover his face as he had done at his first court appearance.

Steyn, whom neighbours said has a "pretty" blonde wife and a six-year-old son, has been charged with at least 32 counts, including rape, kidnapping and murder.

He has not been charged with the murder of Lazanne Farmer, who escaped by jumping to her death from his bakkie before he allegedly raped her friend.

Prosecutor Carina Coetzee said that she could not proceed with the case until a post mortem was completed, and DNA results and a toxicology report were finalised.

"The forensic science labor-atory has indicated that the DNA results should be available by January," she said.

Three previous attempts to find out from laboratory official Selby Ndlovu when the toxicology report would be completed came to nought.

Coetzee said: "The cause of death cannot be obtained and this is holding the case up."

Coetzee told the court that she would apply to the national director of public prosecutions for the charges to be "centralised" when the investigation is completed because some of the offences attributed to the Sunday Rapist took place outside the Krugersdorp Magistrate's Court's jurisdiction. It is likely that the case will be transferred to the Johannesburg High Court.

The De Waal family refused to speak to reporters but their trauma counsellor, Lee Lerm, said: "It's not easy for them being here but they wanted to see him, to know what he looks like."

The case has been postponed to February 1.