Some Marikana miners say they will fight to the death 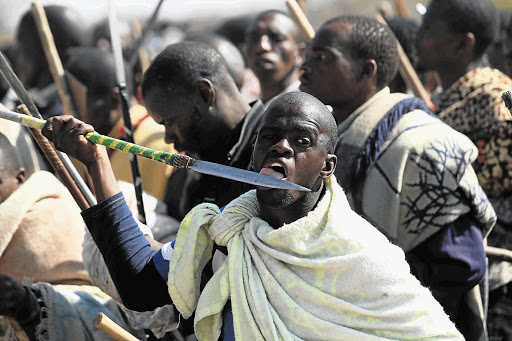 Frantic wives searched for missing loved ones, President Jacob Zuma rushed home from a regional summit and some miners vowed a fight to the death as police announced a shocking casualty toll from the previous day's shooting by officers of striking miners: 34 dead and 78 wounded.

Other media put this figure at 44 dead.

Wives of miners at the Lonmin Marikana platinum mine, northwest of Johannesburg, took the place of dead and wounded husbands on Friday in staging a protest.

But this time instead of asking for higher wages as the miners had done, the women demanded to know why police had opened fire Thursday with automatic rifles, pistols and shotguns on the strikers, many of whom had been armed with spears, machetes and clubs, as they rushed toward the officers.

Police said at a news conference that it was in self-defence, noting that strikers even possessed a pistol taken from a police officer they had beaten to death on Monday. But video footage indicates the miners may have simply been trying to flee tear gas that police had fired at them moments earlier.

As the miners rushed away from a hill they had occupied and that was being tear-gassed, police opened fire, including with automatic rifles. Police were perhaps jumpy, knowing that the strikers were armed and that two officers had already died earlier in the week.

"Police stop shooting our husbands and sons," read a banner carried by the women on Friday. They kneeled before shotgun-toting police and sang a protest song, saying "What have we done?" in the Xhosa language.

National police Chief Mangwashi Victoria Phiyega told a packed news conference that Thursday was a dark day for South Africa and that it was no time for pointing fingers, even as people compared the shootings to apartheid-era state violence and political parties and labour unions demanded an investigation.

Zuma returned home from a summit in Mozambique and announced an official inquiry into the killings, which he called shocking and tragic. The president headed directly to the mine, 70 kilometres northwest of Johannesburg, where his office said he would visit injured miners in the hospital.

At least 10 other people were killed during the week-old strike, including the two police officers battered to death by strikers and two mine security guards burned alive when strikers set their vehicle ablaze.

Makhosi Mbongane, a 32-year-old winch operator, said mine managers should have come to the striking workers rather than send police. Strikers were demanding monthly salary raises from R4 000 to R12 500. Mbongane vowed that he was not going back to work and would not allow anyone else to do so either.

"They can beat us, kill us and kick and trample on us with their feet, do whatever they want to do, we aren't going to go back to work," he told The Associated Press. "If they employ other people they won't be able to work either. We will stay here and kill them."

Research released by the Bench Marks Foundation, a non-governmental organisation monitoring the practices of multinational mining corporations, found that Lonmin had a bad track record with high levels of fatalities and keeping workers in "very poor living conditions".

According to the report released Tuesday, workers often live in deteriorating shacks without electricity. Some children suffer from chronic illnesses due to sewage spills caused by broken drainage.

The mining company said earlier that it would withhold comment on the report until the conflict situation cooled down.

The shootings "awaken us to the reality of the time bomb that has stopped ticking - it has exploded," The Sowetan newspaper said in a front-page editorial Friday. "Africans are pitted against each other... They are fighting for a bigger slice of the mineral wealth of the country."

The youth wing of the ruling African National Congress party argues that nationalization of the nation's mines and farms is the only way to redress the evils of the apartheid past. Zuma's government has played down those demands.

At hospitals in the area, people gathered, hoping to find missing family members among the wounded. At the scrubland scene of the killings, a woman carrying a baby on her back said she was looking for a missing miner.

"My husband left yesterday morning at 7am to come to the protest and he never came back," said Nobantu Mkhuze.

Shares in Lonmin PLC fell as much as 8% Friday. Since violence broke out last weekend at the Marikana mine, shares have fallen by as much as 20%, wiping some R5 billion off the company's market value.

The company, the world's third-largest platinum miner, has also been hit by Thursday's announcement that chief executive Ian Farmer is hospitalised with a serious illness.

Meanwhile Friday, police investigators and forensic experts watched by about 100 people combed the scene of the shooting, planting multicoloured cones and numbered placards to mark evidence amid the dirt and bushes where the shooting took place. Police also searched the rocky outcropping where thousands of miners had gathered daily to strike.

The South African Police Service defended officers' actions, saying in a statement that they were "viciously attacked by the [strikers], using a variety of weapons, including firearms. The police, in order to protect their own lives and in self-defence, were forced to engage the group with force."

Poor South Africans protest daily across the country for basic services like running water, housing and better health and education. Protests often turn violent, with people charging that ANC leaders have joined the white minority that continues to enrich itself while life becomes ever harder for the black majority.

The Law Society of South Africa said the miners "have been the victims of an escalating breakdown in conflict resolution, particularly in the mining industry."

"This breakdown is symptomatic of our society and body politic in South Africa," the society added.

NUM secretary-general Frans Baleni has said that some of his union members were on a hit list, including a shop steward killed Tuesday by strikers.