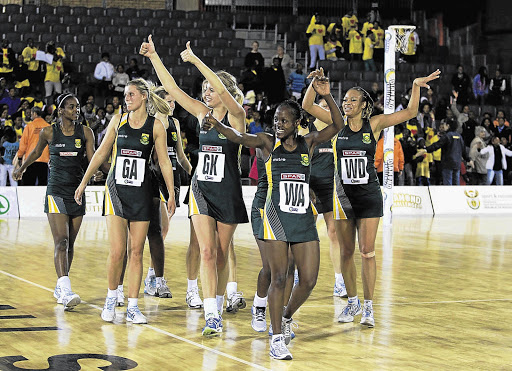 Players of the triumphant Proteas team do a victory lap after winning the netball Diamond Challenge final against Malawi in Pretoria on Saturday. The victory means that the Proteas, who lost to Malawi earlier in the tournament are now the top netball team in Africa

South Africa's netballers overcame their old nemesis, Malawi, on Saturday night in the final of the Diamond Challenge.

The 47-43 victory establishes the Proteas as the top netball team in Africa.

Malawi started strongly, as usual, dominating possession and took a 12-10 lead at the first break.

The South Africans, however, fought back in the second quarter but were able to cut the Malawian lead to only one point at 23-22.

Chrisna Bootha turned the game around for South Africa in the third quarter. Having missed the first two matches of the tournament with flu, Bootha arrived at the courts alone, early in the morning, and worked on her shooting before the final. It paid off and she helped give the Proteas a six-goal lead midway through the third quarter.

A rare mistake in the circle allowed Malawi back into the game but the Proteas refocused quickly, outscoring their opponents 14-9 in the third period.

Malawi pulled it back in the final 15 minutes and kept the South Africans on their toes by picking up the pace.

Mwayi Kumwenda's experience showed as the Malawian shooter was impressive with her quick handling. It was a tense final few minutes with only one point separating the sides at times, but South Africa held their nerve to lift the trophy.

Bootha's final statistics showed a 90% accuracy in her shooting while Kumwenda was far and away the shooter of the tournament, scoring 39 from 41 attempts. South African captain Zanele Mdodana said the team were determined not to lose to Malawi twice in succession, having been beaten by them earlier in the tournament.

Mdodana said it had been a team effort and the coaching staff, Elize Kotze and assistant Lana Krige, deserved praise as they had more belief in the players than they had in themselves.

"It's about time South Africa were back as the best team in Africa," said Kotze.

"It will always be a tough encounter against Malawi and I cannot ever imagine playing them and having an easy game.

"The score could have been higher, but considering Chrisna [Bootha] was not supposed to be on the court and Maryka Holtzhausen, our goal attack, had a stomach bug, I can't complain. I saw something out there today which pleased me more than anything - the commitment and the fact that the girls would put anything on the line to win," she said.