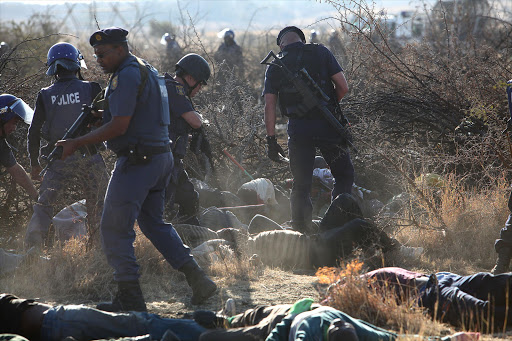 Police examine the scene in the aftermath of the Lonmin mine worker shooting at Marikana. File photo.
Image: Alon Skuy

As Lonmin yesterday re-issued its ultimatum to about 3000 striking rock-drillers at its Marikana mine to return to work or be fired, the miners insisted that they would "rather die" than return to "slavery".

Thirty-four striking miners were shot and killed at the mine, near Rustenburg, in North West, on Thursday when they stormed a police line.

"People have died already so we have nothing more to lose ... we are going to continue fighting for what we believe is a legitimate fight for living wages. We would rather die like our comrades than back down," said miner Kaizer Madiba.

President Jacob Zuma yesterday called for a week of mourning after the tragedy and set up an interministerial commission to deal with the crisis. He reiterated his call for a judicial inquiry.

Lonmin has refused to give in to the demands.

The JSE and London-listed company stood by the court order, obtained on August 10, that the miners return to work or be fired.

Madiba and his co-strikers watched 34 of their colleagues being shot and killed by police.

Armed with pistols, shotguns, pangas and traditional weapons, the miners stormed a line of police carrying semi-automatic rifles and pistols.

Yesterday, the miners vowed to fight to the death.

"The only thing that will end this strike is a positive response from management. I am still asking myself why management refuses to negotiate with us.

"We only want R12000 for rock-drill operators and a minimum wage of R7500 for everyone working underground," he said.

Madiba said the strikers would meet today to decide what to do next.

All they wanted, he said, was to be able to create a better future for their children back home.

Thursday's killings were against the backdrop of a week-long violent illegal strike by the Lonmin miners, in which 10 people were killed, including two policemen sent to bring calm to the situation, and two security guards, who were burned to death in their car.

Lonmin spokesman Barnard Mokwena yesterday defended the company's decision to re-issue the ultimatum, saying it applied only to rock-drill operators.

"There are many options on the table. It is not as if 'To fire or not to fire' is all we are considering."

Mokwena said it was not the company's decision to re-issue the ultimatum. Instead, he said, the wording was a consequence of the court order the company had obtained.

"The company is going through a mourning period and is focused on the needs of its employees and their families," he said.

But the ultimatum has angered the Association of Mineworkers and Construction Union (Amcu).

"It is too harsh of management to talk in this way," said Amcu treasurer Jimmy Gama, describing the ultimatum as "very unfair".

Frans Baleni, the secretary-general of the National Union of Mineworkers, said the situation was still very "sensitive" and it could not be expected that workers would take up their duties if they were threatened by more violence.

Zuma said yesterday: "We must avoid finger-pointing and recrimination. We must unite against violence from whatever quarter."

The inter-ministerial committee, which will be led by Minister in The Presidency Collins Chabane, is made up of North West Premier Thandi Modise and ministers including Mineral Resources' Susan Shabangu and Police's Nathi Mthethwa. They are due to visit Marikana today.

Zuma's spokesman, Mac Maharaj, yesterday said details of the judicial inquiry into the deaths of the miners would be made public this week.

Baleni pointed to "other hot spots in the platinum sector", hinting that there was a risk of a spillover of violence into other sectors.

Gideon du Plessis, general secretary of trade union Solidarity, said he knew of "early signs of the same conflict" in other places.

Chief executives - drawn from various mining sectors - met top government and trade union officials, as well as the Chamber of Mines, on Saturday to discuss the problems besetting the mining industry.

The meeting reportedly ended with the following goals defined:

Repair damage to the image of the mining industry;

Avoid a spillover of violence into other industries in the mining sector; and

Stabilise the industry to limit opportunities for what the meeting's participants described as "militant opportunists".

It is believed the last goal was in reference to expelled ANC Youth League president Julius Malema, who visited Marikana on Saturday.

He called for Zuma and Mthethwa's resignations because of the massacre.

The miners took a break from protests yesterday, sitting around in groups drinking, shaving and sharing memories of their dead comrades.

Though on Thursday hundreds of heavily armed police were patrolling Wonderkop, where the shooting took place, the only sign of a police presence yesterday was a roadblock set up for the police to search vehicles for weapons.

Police spokesman Captain Dennis Adriao said that though the situation was quiet but tense, a strong police presence in the area will be maintained until everything was under control.

The 259 strikers arrested in connection with the violent protests will appear in the Rustenburg Magistrate's Court today.