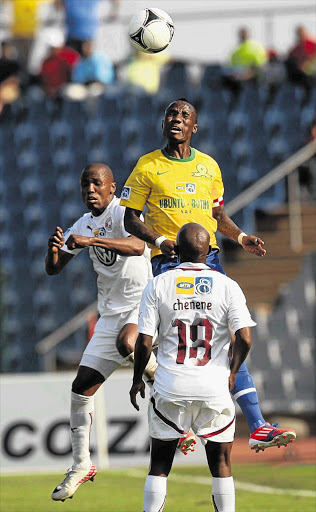 Teko Modise of Mamelodi Sundowns battles it out with Shere Lekgotwane and Bennett Chenene of Swallows during the MTN8 second leg semifinal at Dobsonville stadium on Sunday Picture: SYDNEY SESHIBEDI

Teko Modise's quest for an elusive cup medal will have to wait until later in the season after Mamelodi Sundowns crashed out of the MTN8 on Sunday, following a 3-2 defeat at the hands of Moroka Swallows.

"We can't be talking about this same thing year after year," he said in a clear reference to the inevitable question about a lack of personal silverware in an otherwise stellar career.

The playmaking midfielder, around whom Johan Neeskens has built his Sundowns side over the last two seasons, has been one of the leading figures in South African football over the last decade, but has never won a winner's medal of any description.

His personal achievements include twice being named the Best Player of the Premier Soccer League season and captaining Bafana Bafana, having earned 61 caps.

But Modise has never been a league champion, having been on the losing side in a cup final four times - the latest example being the Nedbank Cup in May.

He had high hopes of breaking his duck in the MTN8 this year but that all came to a sticky end at Dobsonville on Sunday.

"We had the game in our hands but conceded two silly goals yet again, which made it difficult for [us] to come back.

"It meant we were always in a rush," said the 29-year-old, who scored a wonder goal from a free kick in the first half, but only after Sundowns had gone 3-0 down in the first 20 minutes.

"We now need to look at ourselves. We need to come back positively," Modise said.