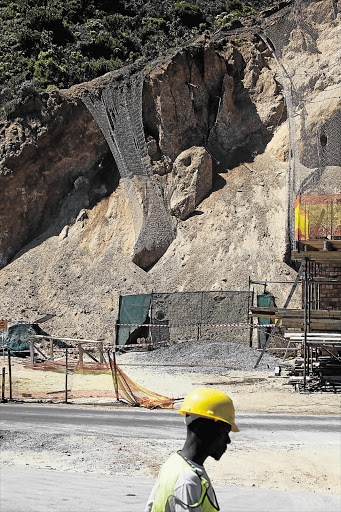 A worker at the section of quarry which collapsed on Chapman's Peak Picture: SHELLEY CHRISTIANS

It will cost about R2-million to stabilise a slope above the site of the Chapman's Peak toll plaza in Cape Town, a Western Cape government official said yesterday.

Transport spokesman Al-Ameen Kafaar said speculation that it would cost "millions" to fix was "extremely exaggerated".

The Cape Times reported yesterday that a section of the quarry in which the control building was being built had collapsed.

Geologist John Compton told the newspaper the section of mountain in question was made up of weathered granite and was very unstable.

"The road cuttings along Chapman's Peak reveal a very thick, rotten granite that is normally covered by vegetation. It's thick, yellow, and crumbly. It's a classic problem when building a road; you artificially produce a steeper slope, which is not as stable as it was before."

Compton said while engineers would probably come up with a design to make the section more stable, this was likely to add to the cost.

He estimated the cost of the project could rise from about R53-million to up to R80-million.

Kafaar said toll road concessionaire Entilini would have to pay for the repairs.

"The province's contribution to the control centre construction is a fixed sum, which is to be recovered from toll fees over the life of the concession."