Education at the school of pimples and faeces 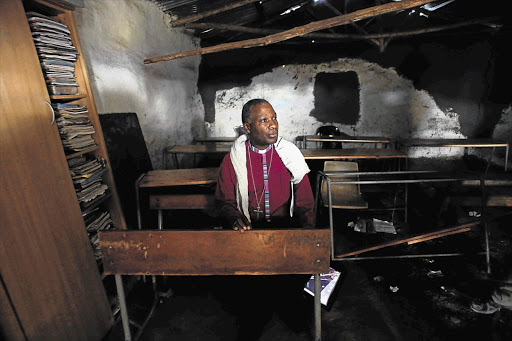 Archbishop Thabo Makgoba at a broken desk in a mud hut used as a classroom by the Samson Senior Primary School in Libode, Eastern Cape
Image: SHELLEY CHRISTIANS

"We get pimples - look here, look at that one, she also has pimples," said a group of girls at Nyangilizwe Senior Secondary School, Eastern Cape.

One girl was trying to lift another's dress to reveal the horror. The girls believe that they might have been infected while using toilets dripping with faeces.

There are four pit latrines for the girls - two of which are covered with flimsy plastic sacking. Sanitary towels are disposed of in the latrines - there are no bins.

"When we [menstruate] it is very difficult. This is a bad situation. The minister must come and see," one girl said.

The school, which has 735 pupils, was visited by some of the country's top academics, writers and activists participating in the Eastern Cape Schools Solidarity Visit, an initiative led by Anglican Archbishop Thabo Makgoba and organised by NGO Equal Education.

Makgoba said it was hoped that the high-profile visit would "help broaden public awareness of the importance of quality and equal education for every child in our country".

Sindiwe Magona, a women's activist and writer, marched to the toilets to see for herself.

When she returned she was in tears.

A teacher at the school, who asked not to be named, said girls often complained about getting pimples after using the toilets. She said she sent them to a nearby clinic. The diagnosis? She has no idea because, she said, no one bothers to report back to her.

At Ntapane Junior Secondary School the toilets are no better. Older children use the latrines but the younger pupils prefer the long grass in the adjacent field.

In the Libode district, schools were closed for two days because of elections being held by teachers' union Sadtu.

Archbishop Makgoba and the other visitors travelled for more than an hour on dirt roads to get to Samson Senior Primary School.

While children played soccer, parents waited on plastic chairs to discuss their plight with the eminent visitors.

There are more than 230 children being taught in mud schools - rondavels owned by community members - which are just inches from collapsing.

Principal Agnes Mbali said she had begged education officials to help: "We don't have a school building . there are no toilets . nothing, just the grass over there," she said.

TWEETS from members of the delegation on the trip:

"How do you teach when you have 132 students in the class?! Absolutely unbelievable?" - economics and education researcher from the University of Stellenbosch Nic Spaull.