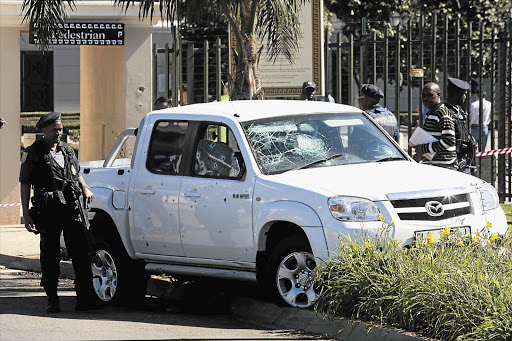 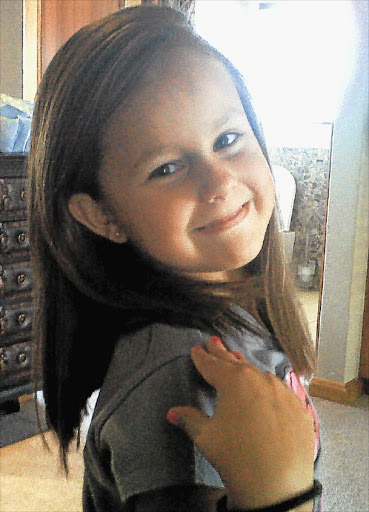 For five-year-old Shané du Plessis and her parents, yesterday was meant to be the end of an exciting family outing.

But a single bullet - fired from the gun of a robber - changed all that within seconds.

Now her parents - frantic with worry - are waiting for news of their daughter's fate from the doctors of a Gauteng hospital.

The girl from Polokwane, Limpopo, could face permanent brain damage and hearing loss after she was hit in the head by bullet fragments.

The family was caught in a crossfire between police and a crew of criminals during a botched armed robbery at Emperors Palace yesterday morning.

More than 20 robbers, armed with AK-47s and handguns, were surprised by the police moments before they could attack the casino.

In the ensuing exchange of gunfire, bullets struck the first-floor hotel room that Shané's parents had booked for the weekend.

Shané was sitting on the bed watching TV when she was hit.

Her parents were moments away from checking out of the room before the incident.

Fragments from several bullets hit the right side of her head, face, neck, arm and hand.

With pieces of a bullet still lodged in her head, doctors at Glynwood Life Hospital fear that Shané could suffer permanent brain damage and hearing loss.

Her mother, Maggie du Plessis, described the shooting as terrifying.

"A lot of shots came through the window and the cement started to fall off. There was blood all over."

Rushed to hospital, Shané underwent a two-hour operation in which doctors strove to remove the multiple bullet fragments.

A bullet fragment lodged on the right side of her brain proved too small for doctors to remove safely - at least for now.

Tests in the next two weeks will determine the extent of brain damage or hearing loss.

A distraught Du Plessis said she saw police surround the building at 6am but was not informed that they were responding to a tip-off about the planned robbery.

"That is why I'm so cross. The reports say it was planned and everyone apparently knew about it.

"I can't believe that if they suspected something was going to happen they did not tell the guests.

"There were children here.

"Someone must be held responsible for this."

A police officer said the shootout began when several of the robbers tried to escape.

"The tip-off came early this morning.

"The problem was the informer could not tell us exactly where the robbery was going to be.

"It was only shortly before they tried to rob the casino that we learnt of the location," he said.

The officer said when the robbers realised the police were lying in wait for them, they tried to escape.

"When they pulled out AK-47s and started shooting we had no choice but to fire back. These guys are killers. They were prepared to kill."

Several of the gunmen managed to escape by climbing over the perimeter walls of the casino compound and fleeing on foot.

Police spokesman Brigadier Neville Malila said that 15 suspects were arrested, of whom two were injured in the shootout.

"Three of those arrested were found hiding in the casino."