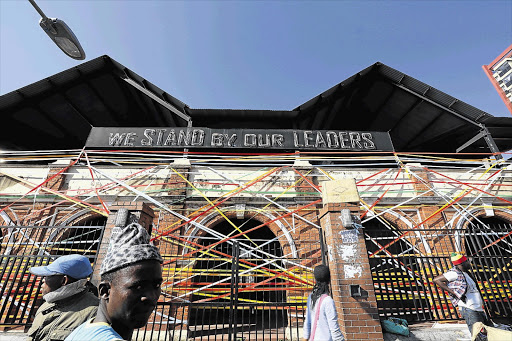 One of Johannesburg's heritage treasures, the Drill Hall, is in a derelict state despite having received a R10-million upgrade funded by the City of Johannesburg in 2004.

The Drill Hall was the venue of the 1956 preliminary hearings of the treason trial, in which ANC leaders Nelson Mandela and Walter Sisulu were among the 156 accused.

Nearly 60 years later the historic site is a home for struggling artists. Unpaid debt led to power cuts in May but electricity was restored after discussions with City Power.

In the 1990s, the defence force vacated the premises and over 350 homeless families moved in.

After a series of fires, which nearly destroyed the building, it was refurbished in 2004.

The R10-million makeover was said to have been intended to promote art, culture and social upliftment.

The new Drill Hall was to provide skills training and child-care facilities, and be a platform for emerging artists.

But a recent visit by The Times revealed a different state of affairs.

The entrance is draped in coloured plastic as part of an art exhibition.

But the main courtyard, once the hall in which the treason trial hearings were held, is in disarray.

Concrete pillars, 5m high, that bore aluminium plaques on which the names of the 156 treason trialists were inscribed, have mostly been destroyed .

Fewer than 20 remain intact, and the pillars bearing the names of Mandela and Sisulu are not among them.

Tenants have been in talks with the City of Johannesburg to resolve maintenance issues.

Rangoato Hlasane, a tenant who runs the Keleketla library at the Drill Hall, said: "This place is seen as a public space, but there are no structures to manage it and no security."

The Times was sent from pillar to post when enquiries were made about the upkeep of the Drill Hall.

The property is owned by the Department of Public Works but title is being transferred to the City of Johannesburg, which is believed to be responsible for its maintenance.

The Johannesburg Property Company applied for the transfer last year.

Company spokesman Brian Mahlangu said: "The transfer is expected to be completed by the end of this year, then we will know what to invest to restore the Drill Hall."

Gabu Tugwana, spokesman for the City of Johannesburg, said once the transfer was complete the city would restore the Drill Hall to its former glory.