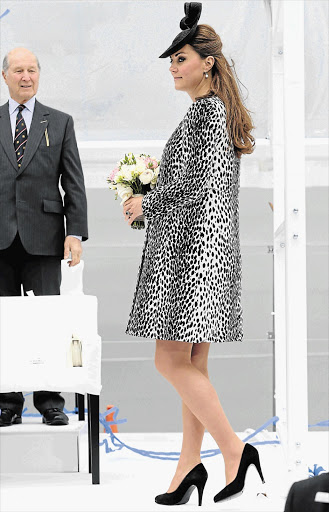 The Duchess of Cambridge is expected to deliver a baby girl soon and everyone has gone potty
Image: CHRIS JACKSON/REUTERS

In London last week, a lone bunch of roses lay at the foot of the Nelson Mandela bust which occupies a plinth near the Royal Festival Hall.

When Mandela dies, the foot of this bust will undoubtedly be strewn with flowers and cards, as will the more imposing statue of the statesman, which stands in the city's Parliament Square. The UK media maintains a keen interest in Mandela's health, as well as in the wider drama surrounding the family name.

But the truth is that UK journalists are about to have a bigger (very small) fish to fry.

"If Mandela dies on the same day the royal baby's born, we're all screwed," a British journalist said gloomily over a pint last week.

From a South African perspective, in the eye of the media storm that is Mandela's health, it may seem hard to imagine what story could take precedence over the fading vitality of Mandela. But it is equally hard to overstate the media attention currently building to a peak around the birth of William and Kate's baby in the UK.

"It's insane," said another journalist.

What Westminster Council is allegedly code-naming "Event SO601867" - that's the royal birth - will almost certainly be one of the biggest media events the world has ever seen.

The tone for the royal birth coverage was set last December when hundreds of male news anchors around the world suddenly found themselves on first-name terms with the medical condition hyperemedis gravidarum.

Essentially a severe form of morning sickness, it was this that sent the Duchess of Cambridge scuttling to hospital in the weeks before Christmas, and prompted a media vigil outside.

Such is the power and influence of the royal foetus that it has already caused Commonwealth laws to be changed.

It took only 24 hours after the announcement of the royal pregnancy for the British government to state that legislation abolishing male primogeniture would be passed as soon as possible, ending the centuries in which it was impossible for a girl child to succeed to the throne.

The same legislative changes mean that it is now also permissible, for the first time, for a royal in the line of succession to marry a Catholic. But just in case you thought all standards were being chucked out at once, it is still impossible for a Catholic to become king or queen of England.

The royal couple has claimed not to know the gender of their child. However, it has all but been accepted that the royal baby will be a girl, due to what was perceived as a critical slip-up by Kate while visiting the town of Grimsby in March.

When presented with a teddy bear by an admirer, Kate reportedly replied: "Thank you, I'll take that for my d ."

The birth itself will happen in the Lindo Wing of St Mary's Hospital, Paddington, where William was born.

As you read this, photographers and journalists are already camped out day and night outside the hospital gates.

Princess Diana famously brought infants William and Harry out to meet the press in front of the hospital, which is what photographers will be hoping for when it comes to this new arrival.

The media scrutiny won't turn off magically when the baby is brought home, though the Palace is likely to try to broker some sort of "gentleman's agreement" with the British press, as was done for William and Harry.

Many column centimetres have been devoted to speculation on the "normality" of the upbringing that the child's parents will strive for, though "normal" is likely here to be a relative term.

US talk-show host Piers Morgan, former editor of British tabloid the Daily Mirror, once recalled an intriguing dinner with Princess Diana and her 13-year-old son, the buck-toothed Prince William. Morgan was offered a glass of wine by Diana's butler, and accepted, while Diana turned down the offer.

William, on the other hand, jumped in: "What about me?"

"You know I do, mummy," 13-year-old William responded.

Part of why the royal birth will receive such intense media coverage is because it's being hailed as a (hopefully) "good news story" in a time of recession and austerity.

But the royal baby is expected to have a more directly positive impact on the British economy.

A spokesman for the Centre for Retail Research said consumers were expected to spend about R3.8-billion on royal birth-related gifts and celebrations, with almost a quarter going towards alcohol.

The Palace is cashing in directly - the Royal Collection Trust website is already selling "Guardsman sleepsuits" for babies, and the Buckingham Palace shop is reportedly also releasing a range of products post-birth.

But anti-monarchist groups have complained that in an age of austerity, not one mainstream politician has dared criticise the fact that R15-million of public money has been spent to renovate William and Kate's accommodation, or the fact that the Queen recently received a 5% pay rise.

This is an edited version of the article which first appeared on Daily Maverick (www.dailymaverick.co.za)