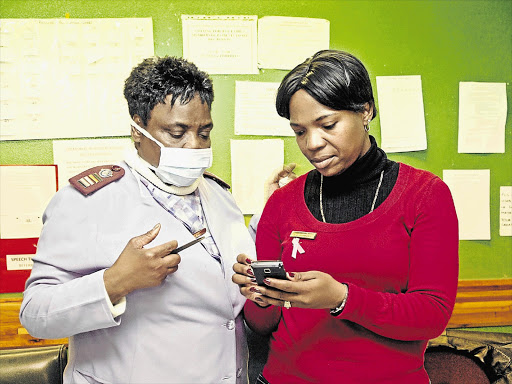 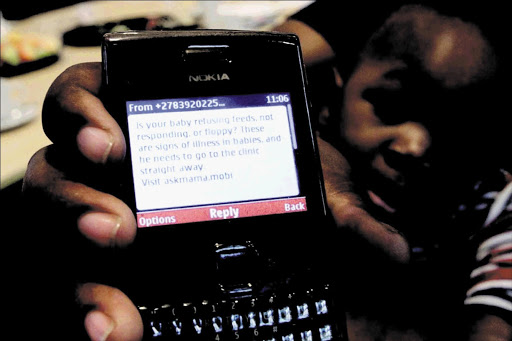 Cellphone users have taken to mobile health applications in a big way.

South Africa is a world leader in using mobile applications to send health messages en masse, according to Peter Benjamin, of healthAlliance, a global organisation that specialises in medical messaging.

Though there was no evidence yet that health messages sent this way were improving health-related behaviour, they were very popular said Benjamin.

And BabyInfo, which offers advice on pregnancy, has benefited 760000 subscribers .

But perhaps the most life-changing intervention is the use of cellphone applications by community health workers.

One of South Africa's biggest health problems is that people do not seek medical assistance until their illness is advanced.

The Department of Family Medicine, at the University of Pretoria, and Mezzanineware Technology Company, have developed technology to deal with this.

Their software prompts community health workers on how to give pertinent advice to people who present with symptoms of disease.

In a project run by the North West health department and research company Mobenzi, community workers receive SMSes if people they refer to clinics do not show up for treatment.

But Benjamin warned that the benefit of these innovations could be lost if there were a lack of coherence between the different non-government organisations' campaigns and the national Department of Health.

HOW ARE YOU? CHECK YOUR CELL

The next big trend in healthcare is self-monitoring of blood pressure, sugar and fitness levels, using electronic devices that send data to phone applications.

Popular devices include Fitbit, which sends weight measurements to i-phone applications, and Zip, which tracks how many steps a person takes, how much exercise he or she gets and how many calories are burnt in doing so, while encouraging the setting of fitness goals.

Folup, a mobile and web-based application that gives users information based on its analysis of data from monitoring devices, connects patients and doctors.

Folup South Africa co-founder and CEO Simon Spurr says the vision behind the technology is to "help patients understand their condition better, connect with other patients, share experiences, assist their doctors to monitor them better ... and, ultimately, to get better, faster".

Folup offers a community in which people can connect and offer each other support, says Spurr.