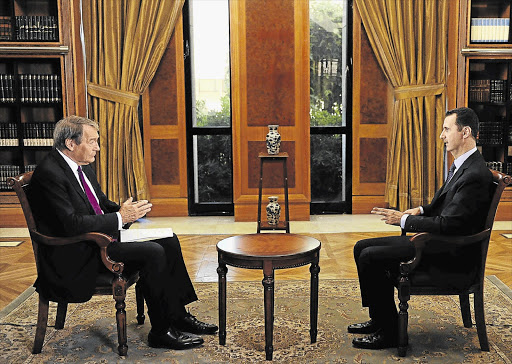 Syria accepted a Russian proposal yesterday to give up chemical weapons and win a reprieve from US strikes, while its warplanes bombed rebel positions in Damascus for the first time since the West threatened military action.

The Russian diplomatic initiative, which apparently emerged from off-the-cuff remarks by the US secretary of state, marks a sudden reversal after weeks in which the West appeared finally headed towards intervention in a two-and-a-half-year-old war.

France said it would put forward a UN Security Council draft resolution for Syria to give up its stockpiles of chemical arms, threatening "extremely serious" consequences if Syria violates its conditions.

Syria's rebels reacted with deep dismay to the proposal, which would halt Western military action to punish President Bashar al-Assad's forces for a poison gas attack that killed hundreds of people in a Damascus suburb last month.

US President Barack Obama, for whom the proposal provides a way out of ordering unpopular strikes days before contentious Congressional votes, said it could be a "breakthrough".

Russia's Interfax news agency quoted Syrian Foreign Minister Walid al-Moualem, visiting Moscow, as saying Damascus had agreed to the Russian initiative because it would "remove the grounds for American aggression".

While the diplomatic wrangling was under way in far-flung capitals, Assad's warplanes bombed rebellious districts of Damascus yesterday for the first time since the August 21 poison gas attacks. Rebels said the air strikes were a demonstration that the government now believed the West had lost its nerve.

"By sending the planes back, the regime is sending the message that it no longer feels international pressure," activist Wasim al-Ahmad said from Mouadamiya, one of the districts of the capital hit by the chemical attack.

The war has already killed more than 100000 people and driven millions from their homes, and threatens to spread violence across the Middle East.

The Russian proposal "is a cheap trick to buy time for the regime to kill more and more people", said Sami, a member of the local opposition coordinating committee in the Damascus suburb of Erbin, also hit by last month's chemical attack.

French officials said their draft resolution was designed to make sure the Russian proposal would have teeth by allowing military action if Assad was uncooperative.

The Russian proposal makes it easier for members of the US Congress to vote to authorise action as part of a diplomatic initiative, without it leading directly to missile strikes.

Republican Senator John McCain, a leading hawk, said lawmakers were working on new wording of a Congressional resolution to ensure "strict timelines and guidelines that would have to be met" for Assad to give up chemical arms.

THE Russian proposal that Bashar al-Assad surrender his chemical weapons arsenal has raised a raft of questions for politicians and disarmament experts alike.

Do we have an accurate assessment of Syria's chemical weapons?

Estimates by Western intelligence agencies vary but Syria is believed to have large stocks of sarin, mustard gas and VX nerve agent that have been produced to be delivered by artillery, rockets or guided missiles, or dropped from the air.

What is the current status of Syria's chemical weapons arsenal?

Syria has never signed a global treaty banning the storage of chemical weapons but their use is banned by a 1925 treaty to which it is a signatory. Damascus has never released an inventory of its stocks.

What is a disarmament process likely to entail?

Iraq and Libya have been disarmed in recent decades. In Iraq, a UN special commission largely achieved its work but, because of allegations that its inspectors were spying, was unable to verify whether chemical and biological weapons had been eliminated.

Muammar Gaddafi cooperated with a Nato programme of disarmament. But after his regime fell large quantities of mustard gas were found in military bases in Libya.

Would the civil war conditions in Syria threaten disarmament?

UN inspectors would need strong security guarantees from all sides that might be impossible to implement. Alternatively, if the stockpile is to be moved out of Syria there would have to be an extensive special forces operation to oversee the extraction of the material to ensure it does not fall into the wrong hands. - ©The Daily Telegraph

WHEN I recently wrote that the only winner in the shambles that the West was making over its response to Syria would be Vladimir Putin, I had no idea how prescient that snide comment would turn out to be.

So incompetent has the Obama White House been in its on-again, off-again action against the criminal despot Assad, and so eager is Barack Obama himself to find an exit from his own impasse, that Russia is being absurdly elevated to saviour of a crisis which it has helped to create.

Thanks to an ironic aside from John Kerry, the US president has jumped gleefully off the hook.

The congressional deliberations over military action can now be put on an even more leisurely schedule.

Putin will have been handed the most spectacular PR victory imaginable and the Assad regime will go its murderous way into the indefinite future.

American resolve and integrity will have taken a blow from which it may take a generation to recover. (Maybe Obama should offer to give Putin his Nobel Peace Prize?) - ©Janet Daley, The Daily Telegraph