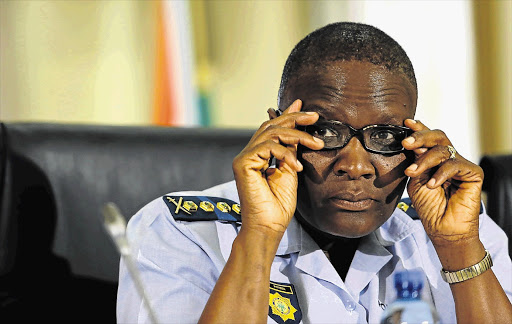 National police commissioner Riah Phiyega announces the annual crime statistics in Pretoria yesterday. She painted a positive picture of falling crime but her use of ratios has been criticised.
Image: MOELETSI MABE

The crime statistics police released in September are flawed, the Institute for Security Studies (ISS) said on Wednesday.

"The effect of this miscalculation is that it downplays the extent to which certain serious, violent crime categories are rising in South Africa, while exaggerating those categories that are decreasing," he said.

"What we are asking is why did this error occur, and at what level was it sanctioned?"

The errors were a result of inaccurate population figures being used to compare the change in crime ratios between 2011/12 and 2012/13.

The ISS said it had called for a formal independent inquiry into why the trends were miscalculated. The miscalculation was more pronounced when it came to determining crime trends at a provincial level, it said.

The official crime statistics indicated that murder in the Western Cape increased by 0.5 percent, when it actually increased by 10.1 percent, the ISS said.

The official statistics for attempted murder indicated a 5.5 percent decrease, when this type of crime actually increased by 1.8 percent, it said.

When national police commissioner Riah Phiyega released the crime statistics in September, she said crime was under control and she delivered a message of hope and confidence to South Africans, the ISS said.

"An accurate reading of the most recent crime trends shows most categories of serious violent and property crimes are actually increasing," Newham said.

"The latest statistics clearly show that in the past year more people were murdered and attacked in their homes, businesses and on the streets than in the previous year. In addition, more houses and businesses were broken into and burgled."

He said that for the first time since 1994, the crime ratios released by the police could be proven to be statistically incorrect. An inquiry should be conducted by independent statisticians from universities and Statistics SA, the ISS said.

"Following the inquiry, we ask that the police correct the crime trend ratios, and share with all South Africans their plan to ensure crime figures are reported accurately in future," said Newham.

"Police leadership has a duty to protect the public and to provide accurate information about crime and the risk it poses to individuals, communities, business and all people in South Africa."

Crime statistics are presented as a ratio of crimes per 100,000 people, an international reporting method to give a better sense of the risk of crime to various sectors of the population.

Working out crime trends was also acceptable, but the trends would be accurate only if the correct population figures were used for every year.

Unfortunately this was not the case when the police calculated the trend using the change in crime ratios between 2011/12 and 2012/13, the ISS said.

The ISS said that the police used population estimates calculated by Stats SA in 2001, which estimated the population at 50.6 million, instead of using data from the 2011 census, according to which there were 52.3 million people in South Africa.

By not updating the population, the police understated the increase in serious and violent crimes.

"The statistical error means crime trends between the last two years as reported in September are wrong in every category," Newham said.

"[The police] released a crime trend analysis based on statistical errors that they should be aware of. This is why we are calling for an inquiry."

He said there were qualified statisticians within the police who knew how to get the calculations right and who could make managers aware of the importance of using the recalculated and correct population estimates.

The ISS said it had written to Phiyega and told her about the error, and had offered to explain and discuss it, but had not heard from her office.

A police spokesperson made a public statement acknowledging that the population estimates had not been updated, but did not acknowledge that this was a problem, said Newham.

According to Newham, the spokesperson portrayed the problem as one of interpretation and a lack of policy, instead of a factual and statistical error.

Phiyega's spokesman Lieutenant General Solomon Makgale was unavailable for comment on Wednesday afternoon because he was in a meeting.

Newham said the failure to correct the crime ratios for 2011/12 showed a problem in the interpretation and lack of policy.