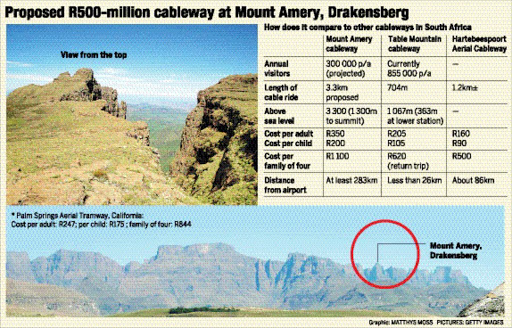 The proposed R500-million cableway in the northern Drakensberg might be grounded after a review of the draft business plan pointed to unrealistic ticket prices and projected visitor numbers.

The review, commissioned by the African Conversation Trust and the Wilderness Action Group, found that the ticket prices - R350 for adults and R200 for children - were more expensive than most cableways in the world.

It would cost R1100 for a family of four to experience the Drakensberg cableway.

Accountant Jonathan Newman, who reviewed the business plan, said there were no studies or statistics contained to indicate that the target market would be willing to spend that amount for the trip.

"With the substantial capital outlay, the success or failure of the proposed cableway lies primarily with the ticket price and number of tickets sold. The business plan does not adequately address these key aspects," he said.

The review also found that visitor numbers to the northern Drakensberg would have to grow by 526% to reach the projected volume of 300000 users a year.

However, Newman said, it was "not necessarily appropriate" to compare the two as the Cape Town attraction was near an airport while the new cableway would be a substantial drive from the N3.

In 2000 a pre-feasibility study found that the development was not economically viable. However, at the 2012 Tourism Indaba in Durban, Mabuyakhulu announced the proposal was being resurrected.

"The project aims at investigating development of a 3300m cableway with an intermediate station, climbing 1300m to the summit and offering expansive views",Mabuyakhulu said.

Hikers and climbers said the weather and safety of tourists had not been taken into account and the local community claimed they had not been consulted.

"On November 23 we had a massive public meeting attended by more than 10000 people from the community, all of whom gave the project a ringing endorsement."

Madlala said a breakfast was also held and the department would set up a website for views to be posted online.

A full environmental impact statement would be done.