On Stage: All good soldiers know how two can play that game 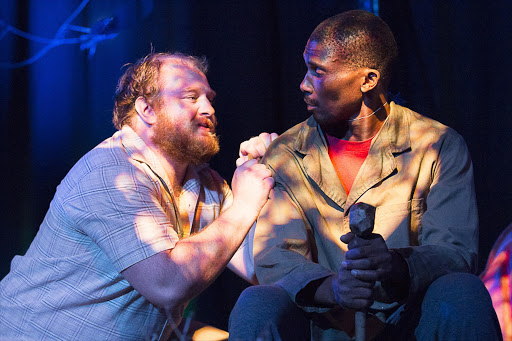 Albert Pretorius plays the role of Gideon le Roux, a former soldier who goes to an amusement park on New Year's Eve in 1989 to escape his troubles. His portrayal of a raging alcoholic suffering from post-traumatic stress disorder is explosive.

Mbulelo Grootboom plays the role of Martinus Zoeloe, the fairground's security guard. Initially, this character seems the weaker one, but as the night wears on and old wounds are reopened, it is clear this former Swapo fighter has dark secrets and a strength of his own.

"Fugard's work is filled with symbols; a poetic mirror dressed as a story, with rich, meaningful characters," director Albert Maritz writes in the programme.

His set design lends Fugard's beloved Karoo the quality of a desolate wasteland while the burning lights of sunset and sunrise, contrast against the gaudiness of the funfair, trap the characters in a living hell.

Playland is performed in Afrikaans but includes English surtitles, something I've never seen done outside of opera.

South African theatre and film legend John Kani, who starred in the original staging of Playland alongside Sean Taylor, called it the first reconciliation production performed in South Africa.

Fugard himself describes it as the most emotionally exhausting play he has ever written.