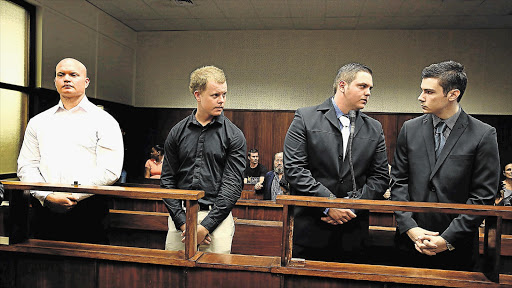 The man who choked former Royal Marine Brett Williams until he lost consciousness yesterday denied that he started the chain of events that led to Williams' death after a Super 15 rugby match last year.

They have raised the issue of the failure of the police to investigate an assault on Williams preceding their own, by Grant Cramer, and the effect the first assault might have had on Williams.

The four are accused of beating Williams to death shortly after Cramer allegedly assaulted him on March 23 last year. Cramer was charged with assault but was released because of insufficient evidence.

During cross-examination yesterday, Cramer said the police did not interview him about his assault on Williams and he was not asked to explain to pathologists how he choked him.

The brothers' lawyer, Christo van Schalkwyk, put it to Cramer that he "conveniently" became a state witness despite knowing that he caused the "majority of the events that led to the deceased's death".

Cramer said he was forced to hold Williams down in a "neck hold" position until he passed out.

Williams' fiancee, Louise Scott, a nurse, flew to South Africa from the UK, for the trial. She ran from the court when Cramer said Williams "seemed like he was on drugs".

Van Schalkwyk read eyewitness statements to the effect that Cramer harassed Williams and that Williams had put up his hands in surrender.

Cramer admitted that his attorney gave him a copy of the case docket, which included witnesses' statements, but denied examining the document.

"Are you seriously suggesting that when you got this [docket] you never looked at it? You are less than forthcoming or truthful," Van Schalkwyk said.