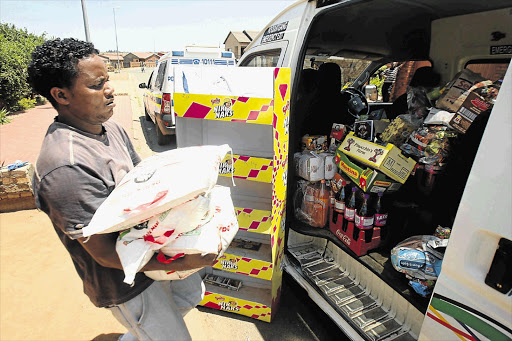 HEAVY BURDEN: A shopkeeper in Soweto loads stock into a minibus in an attempt to escape marauding mobs of looters attacking shops owned by foreigners, apparently in retaliation for the fatal shooting of a 14-year-old boy, Siphiwe Mahori, on Monday night
Image: VELI NHLAPO

Police in Soweto were yesterday forced to call for reinforcements as attacks against foreign shopkeepers continued to escalate in the country's biggest township.

Nine people were arrested for theft, public violence and possession of stolen property after residents went on a looting spree yesterday.

Police spokesman Warrant Officer Kay Makhubela said the attacks were apparently in retaliation to the fatal shooting of a 14-year-old boy earlier in the week.

"[The violence] has escalated to other areas. It is the whole of Soweto. We've called for support from other police stations to keep the police presence high. We're talking to the community and are trying to ask councillors to talk to the community," said Makhubela.

The attacks began in Snake Park on Monday night after Siphiwe Mahori, 14, was shot and killed, allegedly by a Pakistani shop-owner, before spreading to other parts of Soweto.

Yesterday, police in Zola, Emdeni, Protea and Naledi had their hands full trying to deal with unruly crowds looting shops owned by foreigners.

In Zola 1, a large crowd arrived at a shop owned by a Bangladeshi man, Mohi Uddin, with wheelbarrows and trolleys to carry their loot. Police reacted swiftly and the group, which had already begun breaking down the shop's walls with hammers, dispersed.

"I don't know what I've done. This shop is my life. I've nowhere to go. I heard about a boy killed in Snake Park and I don't know why we're attacked," Uddin said.

His landlady, Thandazile Sokhela, said she was alerted by a friend on Tuesday night that her house was going to be attacked.

Some of the Somali shop owners closed their businesses fearing for their lives, while others continued to trade but did not allow customers to enter their shops.

The attacks on Somali businesses have raised fears in the community of a resurgence of xenophobic attacks that first hit the country in 2008.

A total of 44 people were killed when xenophobic attacks began in Alexandra township and spread to the East Rand before escalating to almost every province.