The Big Read: Banking on the future 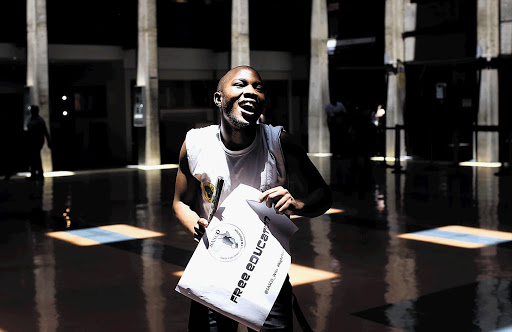 PLAYING IT FORWARD: When a poor student hobbled by an unequal school education arrives with little information on student finance and few 'back-up' options, that student becomes a statistic among those without jobs, without a degree and without training
Image: ALON SKUY

It is the time of year that every university leader and administrator fears. Across your desk sits a bright young student from a rural area clutching a promising National Senior Certificate statement of results.

The student has missed the deadline for any bursaries and used money borrowed from an uncle to make the harrowing journey from a distance to enter, for the first time, the gates of a mesmerisingly large place called a university. The university has no more money, public or private.

"What must I do?" asks the terrified student as tears run down her cheeks. Day after day as January rushes towards its end, this scenario repeats itself thousands of times across the 25 public university campuses of South Africa. It will happen again next year, and the year after that, unless we do something different.

I believe it is time to implement free higher education for all first-generation students. The situation has become bleak.

Among the reasons many deserving students cannot enter higher education is the simple fact that they have no money. They compete for state funding via the National Student Financial Aid Scheme, but those generous funds are never enough; they disappear quickly on a first-come, first-served basis inside institutions with efficient disbursement systems.

Often first-generation students have unemployed parents who do not qualify for bank loans and have poor credit histories, so options outside of NSFAS are extremely limited.

The students scramble like crazy to raise the initial funds for registration, just to get in, blocking out the cold reality that the full cost of tuition, books and accommodation, among other expenses, still has to be met. The desperation and anxiety among the youth at this time of the year tears at the hearts of those university administrators who have to deliver the career-ending news that "NSFAS funds have been exhausted" or "We have no choice but to ask you to vacate the residence".

The students played by the rules, they obtained distinctions, and now they have no money. Their dreams lie shattered even before they have a chance to get a degree. The degree, research shows, makes a massive difference in income potential, and one degree in a family already begins to alter the economic destination of the domestic unit. An investment in first-generation, first-degree students could significantly affect both the financial fortunes of the family and the economic wellbeing of the country. All it takes is the political will to sign this cheque.

Whether or not we make that decision will say a lot about the kind of country we are, or hope to be. By making this political decision we signal a value system that places priority on education of the poor and the importance of the first opportunity.

By not tying this decision to race but to first-generation status we send a further signal of inclusion, especially among those who stand to lose out on opportunity by virtue of race and class; we are different, therefore, from the previous government.

An 18-year-old should not have to bear the stress and distracting anxiety of not knowing how they will pay for studies. That burden alone will affect their ability to concentrate on studies and be successful in year one. Pushing students into sleeping in toilets or engaging in illegal activities to make money for education should not be a judgment on them as individuals but on society as a whole. We can do better.

Critics of capitalist education used to talk about the reproduction of inequalities through education. High-minded nonsense? Think again. Education is supposed to be the great equaliser, the instrument for levelling the playing fields. Given the way we fund higher education, those who succeed at university are those with money.

When a poor student already hobbled by an unequal school education arrives at the gate with little information on student finance and few "back-up" options if she does not get into university, that student becomes a statistic among those without jobs, without a degree and without training. The resilient minority survive, but the majority do not. In this way higher education continues to allocate privilege and disadvantage with ruthless efficiency.

It is not, therefore, simply the personal or even domestic benefits of free higher education that are at issue, but our capacity to create, in the long term, a more equal and more just society.