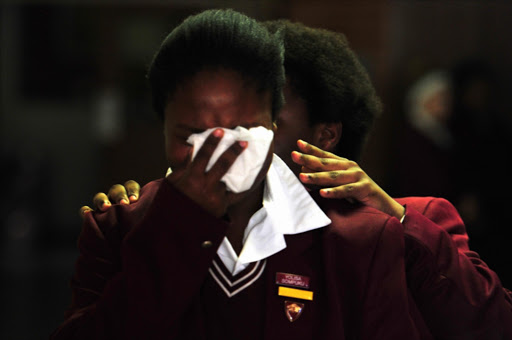 The Port Elizabeth man who has been arrested for the shocking murder of his pretty schoolteacher wife was allegedly having an affair with another woman.

Police have quizzed 26-year-old Chanelle Coutts about her links to Christopher Panayiotou, who is due to appear in court tomorrow.

Coutts, who managed a supermarket owned by Panayiotou, is strikingly similar in looks to the murdered Jayde Panayiotou. Eyewitnesses said the businessman and Coutts were often seen together in and around the shopping complex where they worked. They were said to be "very affectionate".

Panayiotou's arrest - and the revelations that there was another woman in his life - are in direct contrast to his tender words at her funeral. "You were the salt in my sea, the stars in my sky and my sand on earth. You have always been and will forever be beautiful in my eyes," he said.

As rumours of motives for the murder swirled around Port Elizabeth this week, it emerged that police launched a huge sting operation to nab the 28-year-old businessman. As he was bidding a tearful farewell to Jayde at her funeral on Tuesday, undercover policemen pretending to be mourners were monitoring his every move.

At the same time, a bouncer from his pub was concluding a plea deal with police that involved the operation to catch Panayiotou for orchestrating his wife's killing.

Bouncer Thando Siyoli, who was arrested by police acting on a tip-off, gave detectives a step-by-step recap of the plot. He claimed Panayiotou had paid him to have Jayde killed.

Jayde, who taught Grades 4 to 7 at Riebeek College Girls' High School in Uitenhage, was abducted by two men from outside her Kabega Park home at about 6.30am on April 21 while she was waiting for a lift. Money was withdrawn from her bank account at an ATM in KwaNobuhle. Her body was found 40km away the next day, lying on open ground.

After agreeing to turn state witness and set up the sting, Siyoli is said to have contacted Panayiotou, demanding more money due to the "hype" around the murder. A meeting was set up in Uitenhage on Wednesday and the money was paid over to Siyoli, witnessed by undercover police.

Panayiotou was arrested at his parents' home in Uitenhage at about 11 that night after the National Prosecuting Authority had confirmed the sting operation was solid. A source said the prosecuting authority had given the go-ahead for the arrest based on evidence that had been obtained.

The Sunday Times has established that Siyoli has been moved out of Port Elizabeth.

Panayiotou's uncle, Peter Becker - who originally offered a reward for Jayde's safe return or information leading to the arrest of the culprits - yesterday said the family were "devastated and shocked" by his arrest.

"Everyone is very emotional and surprised, as one could imagine. We are all shocked more than anything else. From what I have heard from the family, he [Panayiotou] is maintaining his innocence. The police are also not telling us much, so we are not sure what evidence they are talking about.

"This whole situation is just so unreal. When we got the news of his arrest, his father almost collapsed.

"Chris is just such a nice guy and it is literally incomprehensible. I can say that the family wants to see the proof that the police say they have. This is just such a sad, traumatic incident for both families and it is almost like we have lost two people now, him and her.

"We believe that whoever is responsible, regardless of who it is, needs to be dealt with by the justice system. The law must follow its course and whoever is guilty must pay."

Becker said a R100 000 reward was offered for information leading to the arrest and prosecution of the man believed to have pulled the trigger - who is still on the run.

"Regardless of who is currently in custody, this man must not be allowed to run around free. He is very dangerous and needs to be taken off the streets," he said.

Several well-placed sources said Panayiotou had been having an affair with Coutts. Two eyewitnesses said they had seen Panayiotou and Coutts being "very affectionate" together in and around the shopping complex.

In February, Coutts posted an image on her Facebook page with the words: "She was like the moon - part of her always hidden".

A car guard at the complex, Ashwil Swart, claimed that after he had been beaten for shoplifting, he had warned Panayiotou that he would tell his wife about his skelm (mistress).

"I used to see them together often, he would touch her and they would sit together in the car. She is very pretty and very young. The truth must come out," said Swart.

A friend of Coutts, however, said the allegations of an affair were untrue.

"She is a very relaxed girl. But I haven't seen her in a long time. She works with Chris and they only had a working relationship," said the friend, who did not want to be named.

Approached at the store, Coutts (above) refused to speak to reporters. She hung up when phoned for comment.

Cherise Swanepoel, who was supposed to give Jayde a lift to work that fateful day, was tight-lipped, too. "I'm sorry, after speaking to the family we've decided not to comment any more," she said.

Police announced their breakthrough on Thursday morning, confirming that two men had been arrested.

They said Panayiotou was arrested at 11 the night before, and 31-year-old Siyoli, who works as a bouncer at Panayiotou's Infinity Cocktail Bar and Eatery next door to his OK Foods store in Algoa Park, had quietly been taken into custody on Tuesday.

Siyoli appeared in the Port Elizabeth Magistrate's Court on Thursday, charged with murder. Panayiotou is due to appear in court tomorrow.

Panayiotou's lawyer, Alwyn Griebenow, confirmed that Panayiotou had been arrested in connection with murder. "I haven't consulted my client on the merits regarding everything.

"Obviously he hasn't been formally charged yet, so we do not know what the allegations are against him except that he has been arrested in connection with murder.

"He is obviously distraught. He doesn't know what to expect. He has never been in a situation like this, he has never been arrested before. So yes, he is not doing that well."

Griebenow dispelled another rumour - that Panayiotou was in financial trouble - and said he was unaware of claims that his client had been having an affair.

On the assault of Swart, Griebenow said his client denies this. Christopher, he said, explained that Swart was "apprehended" by a security guard who "beat him up". But Christopher was not present.

He denied his client was arrested after a sting operation.

"The arrest took place at his father's house with family members present. That was at 10:30 pm on Wednesday.

"Earlier police sent Thando to him requesting money from him and they met each other. They parted but nobody was arrested at that time."

Provincial police spokeswoman Brigadier Marinda Mills would not comment on claims about Panayiotou having had an affair.

She confirmed that the task team was working around the clock to find a third suspect.

It is believed this is the gunman, and that he may be linked to the hijacking and abduction of a pregnant woman at Greenacres shopping centre in Port Elizabeth two months ago.

This week, it emerged that Panayiotou had plagiarised parts of the moving eulogy he delivered at Jayde's funeral. It was glaringly similar to a eulogy found online.

On Friday afternoon there was a sombre mood at Panayiotou's bar as people trickled in. There was no music.

Patrons sat quietly with their beers, the only sound coming from the slot machines.