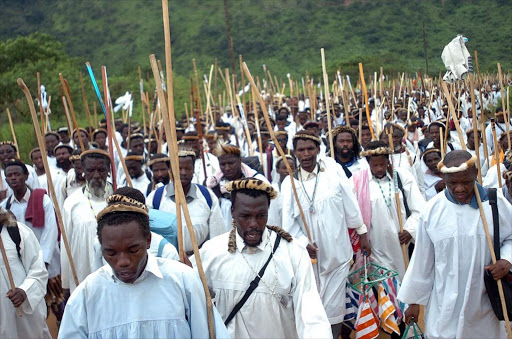 The eBuhleni faction of Mduduzi Shembe march in Durban as the battle for leadership of the church continues in the high court.
Image: Siyabonga Mosunkutu

Durban law enforcement agencies made their presence felt at the city’s High Court on Wednesday as two opposing factions of the Shembe church arrived carrying an assortment of weapons.

According to the ANN7 website, members of the two factions of the Nazareth Baptist Church, commonly known as the Shembe Church, arrived at the court precinct wielding a mixed bag of hammers, golf clubs, knobkerries, planks, sticks, baseball bats, hockey sticks and bricks.

Chaos erupted on Tuesday when hundreds of members from the two factions, who clashed outside court in this video clip below, tried to enter the courtroom that only seats 50 people.

Even lawyers' efforts to control the angry crowd proved futile.

According to reports, Shembe had indicated shortly before his death that he wanted his son, Mduduzi, to take over the leadership of the church, but his cousin, Vela, has strongly contested this – leading to a protracted succession battle since 2011.

Vela has been in a bitter dispute with Vembeni’s son, Mduduzi Shembe over who should lead the church following the leaderless void left after Shembe’s death.