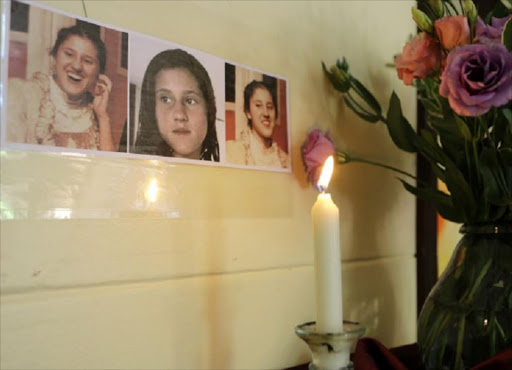 Murdered teenager Franziska Blöchliger’s father has recounted the eerie silent phone calls that he and Franziska's grandfather received from his daughter’s cellphone while driving through the forest where she went missing.

Florian Blöchliger said that a child screaming in the background is all that he could hear on the other end of a phone call that lasted about 30 seconds.

His father also called him to say that he had received a call from Franziska's phone and that he had heard the same thing.

The family’s ordeal began on Monday afternoon when Franziska disappeared while on a 5km run in the forest.

"We kept on phoning her all the time‚ she was running with her iPhone on her arm and earplugs so when the phone rings you'll obviously hear that. So she wasn't answering the phone but the phone was on and ringing all the time‚" Florian said.

"While driving in the middle of the forest‚ all of a sudden the cellphone called me‚ it was my daughter in the back (of the caller ID) and I saw it was Franziska calling so it was a relief that my daughter was here.

LISTEN TO THE FATHER TALK ABOUT THE CALLS

"And I shouted ‘Where are you!?’ only to hear children's noises in the back‚ like a screaming child - not my child - somebody else’s child. And after about 30 seconds the phone was put down‚" he said.

"I hysterically got even crazier so I went back immediately and told the police what happened. My father called me and said Franziska's phone also phoned him and the same thing happened to him as well‚" he said.

Sixteen-year-old Franziska's body was found about 25 minutes after the phone calls and the iPhone was later tracked to the nearby suburb of Westlake where police recovered it on Tuesday night.

Three suspects are being detained and questioned by police. The case has now been taken over by a national SAPS task team.

Despite this‚ Florian and his wife Shireen are doubling the reward for information that could lead to their daughter's murderer‚ up to R100‚000.