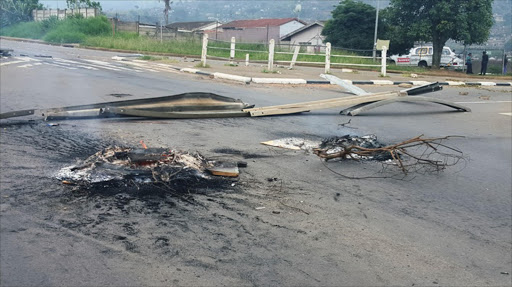 Police were on Wednesday counting the cost of two consecutive days of violent protest action in Copesville, Pietermaritbzurg.

Local councillor Thandi Ndlovu’s house was burnt down during the action, which started on Monday morning. Residents of the area have demanded her removal, saying she was at the forefront of poor service delivery and was in line for re-election during the local government election in August.

KwaZulu-Natal SAPS spokesman Major Thulani Zwane said that about 5000 residents had been involved in the protest action and had blockaded New Greyyown Road with burning tyres, stones and metal barriers. Apart from Ndlovu’s house, two park homes at the local clinic were also set alight.

The value of the damage has not yet been established.

“Twenty-seven suspects were arrested and charged with public violence. They appeared yesterday in the Pietermaritzburg Magistrates Court [on Tuesday] and were released on warning. The case was remanded to 24 May 2016 for further investigation,” said Zwane.

Zwane said the situation was “quiet” on Wednesday morning.

In a statement, KZN Provincial Commissioner, Lieutenant General Mmamonnye Ngobeni, said: “We are appealing to the members of the community to exercise their rights to protest, peacefully. We strongly condemned the acts where properties are damaged by the unruly crowd.”