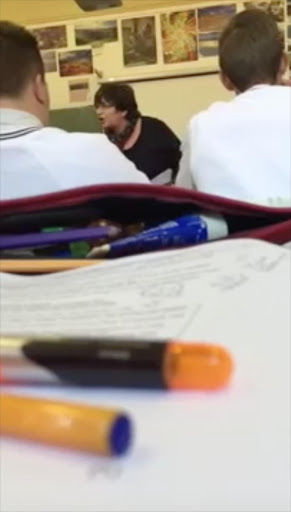 A Jeppe Boys High School teacher has been filmed on video "losing it" with a pupil (warning: strong language).

In the 32-second video‚ which appears to be taken from a cellphone by one of the learners in the class‚ the teacher is screaming at another pupil.

"God you are such an idiot‚ I have to say to you‚ stop your sh*t and work. Really‚ where is your book? Where are your notes? What the f*ck is it doing in your case. Oh shut up you idiot‚ you cannot talk back because you know you are guilty."

The teacher then raises what looks like her middle finger and says: "This my finger. You can leave!"

The school‚ Johannesburg's oldest public school‚ said it is investigating an incident where a teacher at the school was captured on video shouting and swearing at a learner.

A video‚ which was posted on YouTube on September 1‚ has been making the rounds on social media‚ pushing up its views.

An official at the school for boys confirmed that the school is aware of the video and has reported the matter to the Gauteng Department of Education.

"We have been dealing with the matter since three weeks ago‚" said a school official who wished not to be named because he is not authorised to speak to the media.

"We are trying desperately to get the person who put it up‚ to get it down. We know who put the video up but we cannot get it deleted.

"We have sent out a statement to communicate this matter to the relevant stakeholders including parents of the children at the school. I cannot go into details of the matter because it's being investigated‚" he added.

The official would not say what sparked the incident.

The Department of Education was not immediately available for comment.