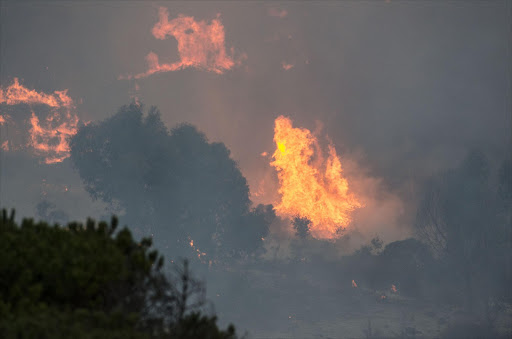 The fire rages on the mountainside around Glencairn.
Image: David Harrison

More than 100 people were evacuated and an historic wine farm building was destroyed as a fierce wildfire raged in the Paarl area on Tuesday.

Firefighters were battling fires in several places in the Western Cape‚ fanned by strong winds and hot temperatures.

Paarl was covered by thick smoke as farm workers were evacuated earlier in the day – many with only the clothing on their backs.

The fire also destroyed the main building on the Calais wine estate.

Johannes Mentoor‚ 61‚ sought refuge at a local school at 4am. He had no time to salvage any personal belongings and has no idea if anything will be left when the inferno is eventually brought under control.

At least 138 people were taken to safety at Dal Josaphat Primary school where they will spend tonight.

The smoke was unbearable when I was off to work this morning. The fire is getting worse #PaarlFire

“Fire is not the big issue now but the smoke that is still covering the area. Altogether there are 212 farm workers that are being looked after. As of now there have been no injuries‚ just a young girl who was taken to hospital for smoke inhalation this morning."

A two-year-old with asthma was also given medical attention after inhaling smoke.

Three helicopters were deployed earlier on Tuesday to help bring a fire under control that raged overnight on the slopes of Table Mountain. Two homes were damaged and residents evacuated their homes in the suburb of Vredehoek.