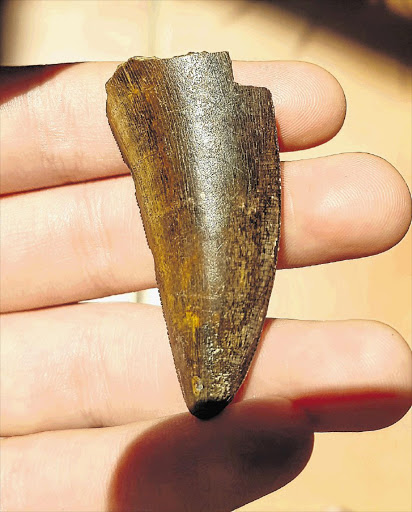 To those who saw it, it was nothing more than a piece of worthless plastic, but to a boy and his grandfather they had a hunch they had found something special.

They were proven right this past weekend when palaeontologists confirmed that the piece of plastic was, in fact, a dinosaur tooth, the first ever found in Knysna.

The hope now is that the tooth may lead to a skeleton.

Two years ago Ben Ingel was walking close to the Knysna lagoon when he noticed something.

"I found a small cave and inside was a small rock with the tooth sticking out of it," Ben recalled.

"Everyone but my grandfather said it was plastic."

Ben kept the tooth until one day he decided to hand it to his grandfather, Vernon Rice.

"Ben was always convinced that it was a dinosaur tooth," said Rice.

Rice then asked some of his bridge-playing friends to help identify the boy's find.

Geologists Rob Muir and Roger Schoon agreed to come to his house to have a look.

Rice said: "They took one look and I could see from their faces we had something."

They suggested Rice send photographs of the tooth to palaeontologist Robert Gess at the Albany Museum, in Grahamstown.

Gess invited Ben and his grandfather to the museum to allow palaeontologists to examine the specimen more closely.

Usually, palaeontologists frown on people picking up fossils, as they are protected by law, but this time they were thrilled by Ben's discovery.

Wits University palaeontologist Jonah Choiniere, who has seen photographs of the tooth, believes that it is about 140million years old and belonged to a carnivorous theropod.

"This was a meat-eater of considerable size, his head would bump on the ceiling of my house," said palaeontologist Dr Billy de Klerk, who has seen the tooth.

Choiniere believes the dinosaur weighed between 500kg and a ton.

"These teeth are so rare that in a span of 30 years I have only seen 15 decent teeth," De Klerk added.

While Ben plans to eventually donate the tooth to the museum, he will be holding onto it for a short time first.

First he wants to take it to school to show his classmates.

If it is a new species, there is even the chance it might be named after its discoverer, Ben.