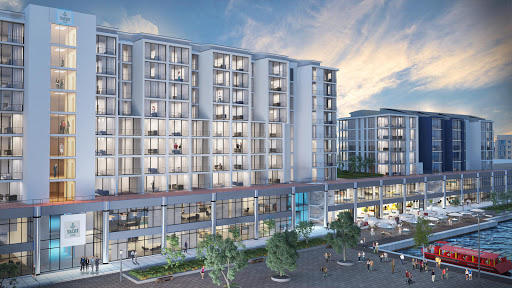 The luxury Yacht Club next to the V&A Waterfront.
Image: Pam Golding Properties

The boat has sailed for would-be property owners of the R1.2-billion development in Cape Town.

Every luxury unit of the Yacht Club next to the V&A Waterfront has been sold. Yet the complex is far from complete.

In a statement Pam Golding Properties confirmed that the upmarket pads will only be ready by ''mid-2018".

“In the adjacent V&A‚ the price of Waterfront apartments has escalated by 85% from 2013 to date. The Marina‚ which was one of the first Waterfront residential developments‚ is selling from R70‚000 per square metre on the canal to R123‚000 per square metre on the front of the yacht basin‚” said Pam Golding Properties area specialist‚ Mariël Burger.

Prices‚ at the new development‚ started at R3-million for a one bedroom apartment to R5-million for a two bedroom spot. Burger said the properties were popular among first-time buyers‚ professionals and business travelers.

Cape Town ranked 37th along with Oslo‚ Basel and Moscow.

“According to the report‚ global UHNW (ultra-high net worth) investors base decisions about where to buy property on a combination of practical‚ emotional and financial reasons and the most desirable locations are those that tick the highest number of boxes in all three criteria‚'' said chairman of Lew Geffen Sotheby's International Realty‚ Lew Geffen.

“In Cape Town‚ foreign interest is driven by numerous factors‚ including the weak rand that affords offshore buyers excellent value compared to most European destinations and similarly cosmopolitan Southern Hemisphere cities like Sydney in Australia where comparable properties are ten times the price.''

According to the World Ultra Wealth Report 2015-2016 there are 212‚615 ultra high net worth individuals around the world. Their combined wealth is US$30 trillion in net assets.

The report predicted that these individuals' global wealth is expected to climb to S$46.2 trillion by 2020.