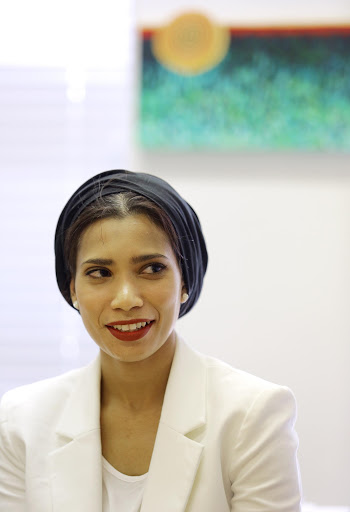 Maryam Fish discovered a gene that is a major cause of sudden death among young men and women.
Image: Ruvan Boshoff

Fifty years after South Africa performed the world's first successful heart transplant, a woman from the Cape Flats has made another landmark medical discovery that could prevent hundreds of cardiac-related deaths every year.

The discovery of a gene that is a major cause of sudden death among under-35s is likely to put South Africa on the map in the world of genetics, showing that the country "is on par with international researchers".

Maryam Fish, 30, of Lansdowne, led an all-female team of researchers at the University of Cape Town, along with Gasnat Shaboodien and Sarah Krause, who made the discovery with researchers from Italy.

The gene, called CDH2, is found in everyone, but a mutation causes a genetic disorder known as arrythmogenic right ventricle cardiomyopathy (ARVC), which increases the risk of heart disease and cardiac arrest.

Sudden cardiac death is estimated to hit more than five young people in South Africa daily, according to the Medical Research Council.

In under-35s an inherited form of disease of the heart muscle plays a prominent role in fatalities as a result of cardiac arrest.

"We sequenced all the genes in the human genome in two cousins who were affected," said Fish, explaining that the cousins were identified after a 22-year-old relative died suddenly.

"We then looked for common variants and had a list of 13,000, which we narrowed down through a series of filtering criteria until we got the CDH2 variant, which was the most likely causal variant in this family."

The team then screened the gene in a number of unrelated individuals who also had ARVC.

This added "more evidence to our case that the CDH2 gene was the causal gene for ARVC".

The soft-spoken PhD graduate comes from a family of good genes. Her father and brother are engineers, and her mother is a mathematician.

Fish said she felt "relieved that I managed to solve the problem after so long", and didn't agree with the assessment of her family's gifted intelligence, shyly remarking that they were "just OK".

Mayosi began hunting for the gene himself as a young scientist in 1996. "Half of [people] will meet their Maker through sudden death," he said. "This will help us understand a common problem by taking it forward to develop drugs that target this particular gene.

"We've taken God's own experiment of an inherited condition to understand the causes of sudden death."

Key to making the discovery was a new technique, whole exome sequencing, which analyses every gene in a human's DNA.

Shaboodien told Fish about the technique after finding out about it during a trip to Italy.

"It took Maryam two to three years to screen one gene, then suddenly you could screen 19,000 genes in a matter of hours," said Shaboodien, who leads the genetics team at UCT.

"We called it genetics on steroids. Without this technique we would not have made this discovery."

Shaboodien said the discovery would help put South Africa on the map in genetics and showed "that we are capable of being on par with international researchers".

The clinical importance of the discovery meant early detection of unsuspecting people with ARVC was now possible.

But Krause said testing for ARVC would not be easily accessible for most people, and the UCT research centre where they worked was one of the few places in South Africa where genetic screening was done.

"I think it's important to understand there isn't available [public] diagnostic screening in South Africa. In [the private sector] you can get blood sent overseas to be screened," she said.