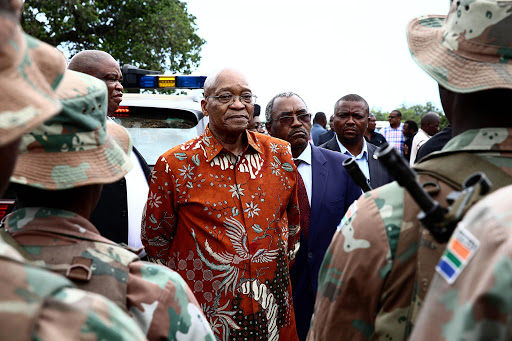 The South African army does not have the money or manpower to step up security of the country's porous borders.

This worrying situation was made clear to President Jacob Zuma on Tuesday as he visited eManguzi in the far north of KwaZulu-Natal.

It came from defence minister Nosiviwe Mapisa-Nqakula amid growing cross-border crime that has created heightened tensions between residents and migrants from neighbouring countries.

eManguzi sits near to the country's Mozambican and Swaziland borders. Zuma said he has received complaints from residents living in the municipalities in the area‚ many of them talking of intolerable levels of cross-border crime.

Stock theft and car hijackings were chief among the complaints. During a tour of the border‚ Mapisa-Nqakula told Zuma that while her department has prioritised the border issues‚ financial and human resources were crippling their effort.

"We do everything but we always hit a snag when it comes to finances. There are huge expectations from us but budget cuts remain a problem. Our force guarding and patrolling the border has been cut down by about 4000‚" she said.

Mapisa-Nqakula said the issue has been highlighted in the Defence Review‚ which talks about the rejuvination of the force. But fiscal decisions were hampering their work. Zuma encouraged Mapisa-Nqakula and her cluster ministers to take this issue to cabinet.

He also questioned the roles being played by other governments. "Do you have joint collaborations with your counterparts in Mozambique?" Zuma asked. Mapisa-Nqakula said these were in place‚ but were not reciprocal.

"The joint collaborations appear to be on our side only. As I speak‚ three of our members were arrested in Mozambique and it took us a long time to negotiate their release‚" she said.

Zuma inspected the border and interacted with locals and Mozambican security personnel across the fence. Zuma said the Department of Planning‚ Monitoring and Evaluation had been directed to monitor progress in the fight against crime in the areas that he had visited.