The rise of the butt selfie...and why it could be dangerous 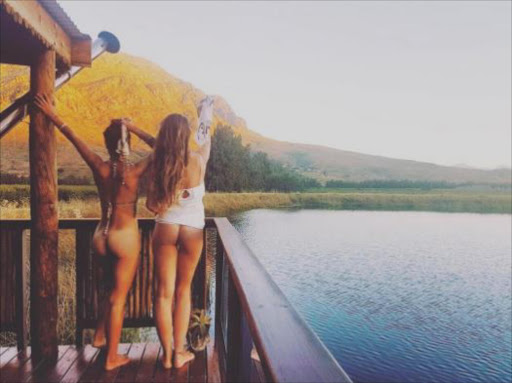 If you have a bum good enough to bare in the latest social media trend‚ be careful – the implications may be worse than sunburn.

This is the warning from police and travel and social media experts following a bare-bottom frenzy on Instagram.

"Making the world happier through butts‚" states the catchphrase for Cheeky Exploits – which has gained over 166‚000 followers. The site wants travellers to upload their snaps of their bare buns at various landmarks.

The travel craze – which has clogged news feeds with photographs of mooning travellers – landed in South Africa last week when a Bulgarian tourist uploaded her #CheekyExploit taken in Cape Town.

The photograph featuring @ginakaramfilova16 and a friend has already attracted 2‚650 likes.

While Instagrammers have praised @ginakaramfilova16 and other cheeky travellers‚ the South African Police Service have warned that it would not tolerate "crimes against public order."

"The matter referred to would be an act of public indecency. In the main‚ if anyone is found to be on the wrong side of the law‚ as the SAPS we will take action and the person will face the full might of the law‚" said police spokesperson Athlenda Mathe.

Thompsons Holidays spokesman John Ridler said posing for a nude picture at any public site or even a private hotel or resort was "not a good idea".

"The law forbids such displays of public indecency and individuals could also find themselves at odds with the code of conduct at hotels.

"What starts out as a little fun could end with a public or private prosecution. It is also inadvisable [to post] semi-nude images on social media as these can be used by others – out of context. "

His travel advice is to "take happy snaps only".

"What many do not understand is that these are sites which may be offended by the act‚ specifically if it is a place of heritage‚ religious‚ historical or cultural history. This would evidently ensure that security would step up on the site and‚ when published‚ a possibility of legality."

Cooper said Instagram users latch on to online fads to "gain attention and a form of self-differentiation from the masses".

However‚ baring bums at landmarks is "not a foreseeable trend."

"It is a short-lived fad in the desire for fame and notoriety. While some accounts may push for a wishful longevity‚ most will be over in a short time. Enjoy it whilst it lasts‚" Cooper explained.