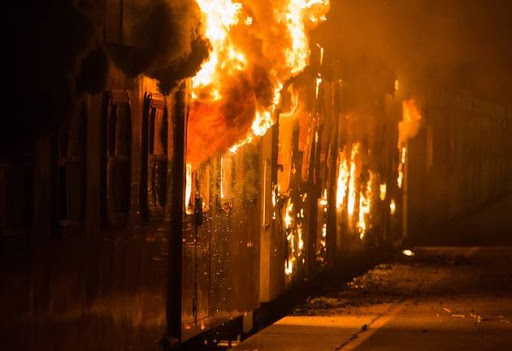 The atmosphere was angry and tense at the station. There were periodic flare-ups‚ unstoppable despite several police cars and a private security contingent inside the station.

At about 9pm a woman we spoke to said she’d waited from about 3pm for her train to arrive. She had children waiting for her at home.

A man walked forlornly around the station holding his child; he’d also been waiting since the afternoon.

We encountered two schoolchildren stranded on the station. One‚ nine years old and in school uniform‚ was crying; he’d been on the station since 3pm. He had an exam the next day‚ he said. He needed to get to Khayelitsha‚ while the other child‚ a girl‚ needed to get to Gugulethu. (A GroundUp reporter drove them to a nearby police station.)

The Vodacom shop on the station was ransacked. So was an MTN shop.

Commuters were stranded with their weekly and monthly tickets‚ many without sufficient cash to use alternative transport.

Metrorail had struck a deal with the Golden Arrow Bus Company that Metrorail tickets could be used on the buses. While GroundUp reporters were there‚ two buses pulled up to transport passengers‚ but there were long queues for them and clearly not enough buses.

Some commuters stoned one of the buses and it left without passengers.

James Gudumede had been waiting since 5pm. He was heading to Gugulethu. “This happens on a daily basis‚” he said angrily. Because of the late trains‚ “people lose their jobs. Prasa [the parastatal that owns Metrorail] does not listen. We are being robbed. We buy tickets.”

A GroundUp reporter who usually uses the trains‚ left work at 3pm‚ only to arrive home at 7:30pm to her four children‚ after negotiating buses instead. The mother of another GroundUp reporter was on a train that travelled from Cape Town station to Mutual earlier in the day‚ then without explanation the train turned back to Cape Town (she was trying to get to Khayelitsha). She spent hours stranded trying to get from one place to another.

Late at night she got stuck in Site C‚ Khayelitsha — unsafe after dark — while trying to get to home to Site B (she eventually got home by taxi). Thousands more commuters across the city no doubt had similar stories.

All this took place while it was a raining and cold in Cape Town.

Metrorail published a statement explaining that electrical power feeds were responsible for the problems.

The company said that it usually has four 11kv power feeds available‚ but two failed and the remaining two became overloaded‚ tripping electricity and halting trains across the network.

He condemned the destruction of property by irate commuters and said that surveillance footage would be studied with the intention of filing malicious damage to property charges.

Angry comments were posted on the Metrorail website. For example‚ one anonymous person wrote: “It is late. Can’t remember when last trains were on time. Late for work as a result. Your service is pathetic‚ trains are dirty and vandalised. Why do you not protect your assets? If you do that there will be less delays.”

- This article was first published in GroundUp.