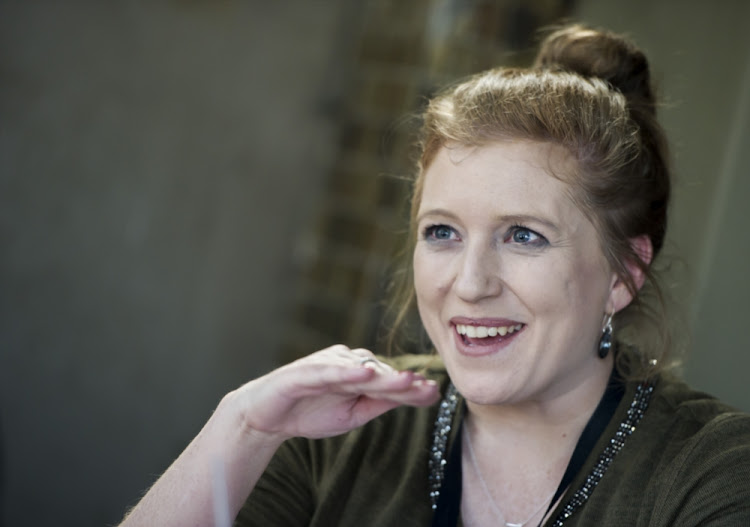 Suna Venter speaks during an interview about her suspension by the SABC on June 24, 2016. File photo.
Image: Gallo Images / Beeld / Deon Raath

"Let's get this party started." That is how the family of Suna Venter and her 13 cousins knew her.

That is how the family of Suna Venter and her 13 cousins knew her.

She loved to have fun with family‚ singing songs with her mother in the kitchen‚ using "questionable dance moves" on the dance floor‚ always winning scrabble games and doing multiple accents to make people laugh.

A memorial service for SABC journalist Suna Venter‚ 32‚ has begun.
News
4 years ago

Suna Venter, who has died in Johannesburg at the age of 32, was one of the "SABC 8" journalists who were fired in 2016 for refusing to obey an ...
Opinion & Analysis
4 years ago

Suna Venter, one of the journalists who came to be known as the SABC8, was found dead in her flat in Fairlands in Johannesburg yesterday morning.
News
4 years ago

Her "enthusiasm"‚ "zest for life" and "fantastic sense of humour" were frequently mentioned during her funeral at the NG Kerk in Fairlands on Tuesday.

Venter had cardiomyopathy‚ a disease of the heart muscle‚ for the past few years and was found dead in her flat last Thursday.

Her family said in statement they believed the stress of death threats and harassment that she received for standing up for SABC independence had exacerbated her illness.

None of the controversy of her being fired from the SABC for ignoring a ban on broadcasting protests and then being reinstated by the Labour Court was mentioned at the funeral.

Instead memories were shared and her life was celebrated.

Her family‚ some of her cousins‚ her boss Foete Krige and Gift of the Givers founder Imtiaaz Sooliman spoke about her "love for life" and "passion" and "lief van gesels [to have conversations with people].

A cousin spoke of how last year on a weekend away with her extended family‚ they went on a hike even though Suna had forgotten to pack walking shoes.

Someone asked her if she would manage the hike in her flip flops but made the mistake of addressing her as "Poplap".

Just to prove a point‚ she walked to the top of the mountain barefoot.

Her brother‚ Wilhelm Venter‚ spoke of how he insisted on watching Suna's first time on SABC TV news in a pub a few years ago.

"I got so close to a fist fight when I demanded that we switch to SABC in the middle of a soccer match in a pub in her first broadcast.

Journalist Suna Venter had recently been diagnosed with stress cardiomyopathy, also known as broken heart syndrome. She was found dead at her flat on 27 June 2017 Subscribe to TimesLIVE here: https://www.youtube.com/user/TimesLive

"We all did watch the news that night to live cheers from complete strangers‚" he said. Her brother ended his tribute saying to his late sister: "I wish the following things for you - that there is chocolate mousse and cheesecake in heaven‚ that you know how much we loved you.

"That you realise how proud we were of you‚ not only for what you did but for who you were."

Her father‚ Dr Phillip Venter‚ said in the past few days her family had cried as much as they had laughed remembering their daughter and sister.

He called his daughter "awesome".

He told journalists after the funeral: "She was a special‚ special child because she was so enthusiastic‚ so full of life‚ so full of zest and so driven by causes.

"She was the soul of the party. "She was one who kept all of us to together with her sense of humour.

"As parents we will really miss that child."

Her sister Tess remembered their adventure in Jordan in 2009‚ when Suna was on her way to Syria for the first time.

They used an old beat up car and negotiated potholes on their road on their way to visit Petra in Jordan.

Suna had been so excited about an automatic bakery they discovered in Jordan‚ and this led to them buying so much more food than they could ever eat "They were days of miracle and wonders‚" said her sister.

Tessa added: "Her creativity‚ her love for words‚ her intellect and her empathy made her a world class journalist and I wish with all my heart she could have had the chance to have a long‚ rich career doing what she loved and had so much passion for."

Sooliman‚ who took Venter to Gaza with Gift of the Givers‚ paid tribute to her passion for people in need and refugee children.

When she was stopped by her manager at SABC from going with Gift of the Givers to Syria in 2013 because it was believed the war‚ bombs and missiles would stress her out and exacerbate her heart condition - she took annual leave and went by herself a few months later at her own expense.

Sooliman said she was a journalist who did not just care for facts of where the bombs fell and how many were injured‚ but cared for the people. She wanted to understand why things were the way they were.

Sometimes her mother would say to her at stressful times: "Kom ons los alles en maak ‘n gastehuis in die Karoo....maak die lekerste kofee‚ jy skryf 'n boek and ons is bekommerd oor niks. " [ Let's leave everything‚ start a guest house in the Karoo‚ make delicious coffee. you write a book and we will be worried about nothing.]

Suna would answer: "Dit werk nie so nie. Die fight is nie klaar nie." [It doesn't work like that. The fight is not over yet].

Her boss at the SABC‚ Foeta Krige‚ said since her death‚ Suna had been described as "heroic‚ determined‚ principled and brave and passionate" in the media. But he said the words forgotten were "compassionate and loving".

Her sister‚ Tessa Venter quoted one of Suna's favourite fictional characters Anne of Green Gables who said: "One can't stay sad very long in such an interesting world‚ can one?”

"It is a beautiful world‚ but we will stay sad for a very‚ very long time‚” said Tessa.