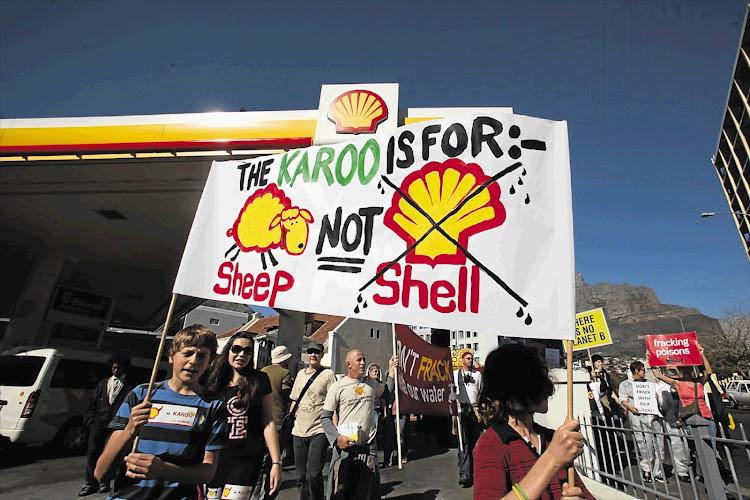 A protest march against fracking in the Karoo. File picture
Image: Supplied

Taxpayers could be saddled with a massive pollution clean-up bill – bigger than the acid mine pollution problem in Gauteng - unless government acts quickly to set up a team of properly skilled inspectors to monitor and police the emerging shale gas fracking industry.

This was the warning from University of Cape Town chemical engineer Prof Cyril O’Connor and several other senior scientists on Thursday at the start of a two-day conference to interrogate the potential impact of shale gas drilling on a massive chunk of land covering almost 172‚000km2 of the Karoo.

O’Connor chaired an in-depth investigation on fracking by members of the country’s top science advisory body‚ the Academy of Science of South Africa (Assaf). After more than two years of work‚ Assaf has produced a 350-page report on fracking that advises the government to proceed with caution before allowing Shell and other oil and gas companies to exploit methane gas in the Karoo region using an unconventional process of gas extraction known as fracking.

The controversial mining method involved fracturing underground rock formations by blasting high-pressure water and chemicals to depths of 2km and more beneath the Earth’s surface.

CHRIS BARRON: Let's go fracking, turn on the shale gas and heat up the economy

O’Connor said there had to be a cradle-to-grave approach to monitoring and regulating the fracking industry‚ lasting 50 years or more once the last gas wells were closed.

In Gauteng‚ he noted‚ no companies had been held legally or financially liable for the legacy of acid mine drainage following more than a century of gold mining.

“We simply cannot have the same happen with shale gas mining‚” said O’Connor‚ noting that South Africa had a history of poor control of current mines and abandoned mines.

In parts of the US‚ it was virtually impossible to monitor fracking properly because there was only inspector policing up to 100 wells simultaneously.

One of the key recommendations of the Assaf report is for the government to initiate a series of baseline studies before the first gas fracking well is drilled.

These studies should determine current groundwater quality and also examine the current natural levels of seismic activity (mini earthquakes). If fracking were to cause new earthquakes or pollution of scarce groundwater at a later stage‚ it would be impossible to prosecute oil and gas companies unless there was legally defensible proof of damage via prior baseline studies.

A shale gas exploration project in the area surrounding the Golden Gate Highlands National Park has left environmentalists concerned about the ...
News
4 years ago

Henri Fortuin‚ a senior official of the Western Cape department of environmental affairs and development planning‚ said there were cases where funds set aside for the closure and rehabilitation of South African mines had been raided deliberately by mining companies.

“I am concerned that if‚ in 100 years or so‚ a (fracking) well-head casing fails‚ the government will have to ask taxpayers to bear the costs of fixing it‚” said Fortuin.

Prof Bob Scholes‚ co-leader of a separate study into fracking impacts by The Council for Scientific and Industrial Research‚ said one of the main concerns by the 146-member research group was the potential for scarce water resources to be polluted by fracking chemicals and other pollutants.

He said all available water in the Karoo had already been allocated for farming and other uses‚ so there was no “spare” potable water for the water-intensive fracking industry. As a result‚ fracking would have to rely either on desalinated sea water or saline underground water.

First it was the Karoo, where energy companies wanted to explore for gas reserves - believed to be extensive. But farming, water resources, tourism ...
Ideas
4 years ago

Because it was such a specialist industry‚ fracking would produce very few jobs in the Karoo and most skills would have to be imported until enough local staff could be trained.

“The number of unskilled jobs it would create is very low – certainly less than tourism‚ and much less than farming‚” said Scholes.

Another major imponderable was the size of the gas reserve.

“Anyone who says they know how much gas there is in the Karoo is lying‚” said Scholes.

Opening the conference yesterday‚ Department of Science and Technology Director-General Phil Mjwara said the United States Energy Information Administration had suggested there could be as much as 385-trillion cubic feet (tcf) of gas in the Karoo formation – but even if exploration confirmed just a fraction of this figure it could still have positive economic impacts for South Africa.

O’Connor also said the true size of the reserves remained unknown‚ but were more likely to be around 20tcf.