An angry mob was judge‚ jury and executioner for two innocent men - incorrectly accused of being child-snatchers - who were stabbed and kicked to death in Pinetown on Tuesday night.

Durban police have shed light on the events leading up to the brutal murders‚ which played out at the Pinetown taxi rank‚ west of Durban. The pair had been accused of abducting a child‚ a claim police have now dismissed as baseless.

Police spokesperson Colonel Thembeka Mbhele said an 11-year-old boy had been with his father and his colleague at the taxi rank.

“The boy goes to school in KwaNdengezi and he was picked up by his father and the other man. The boy told his father that he was hungry, so they stopped and his father left the car to get something to eat‚” she said. 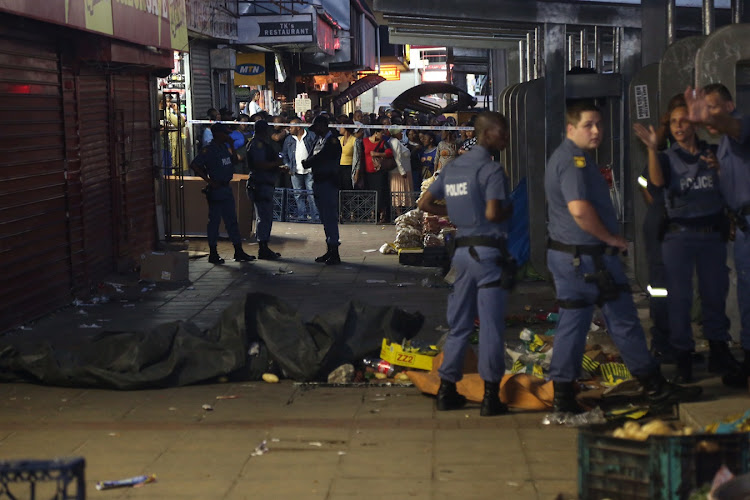 Policemen guard the body of the man who was beaten to death by a mob in Hill Street in Pinetown on Tuesday night. He and another man were accused of abducting a child.
Image: Jackie Clausen

“The community decided that the boy had been abducted and they began assaulting the man and they also turned his car over. Another man tried to stop the crowd and they turned on him. We urge people not to take the law into their own hands‚" said Mbhele.

Blue Security published a statement from an “eyewitness” who said she had seen a girl bound and stuffed into the boot of the car. It is unclear where this information was sourced from.

TimesLIVE previously reported that police had rushed to Stanfield Lane‚ which flanks the taxi rank‚ and saved a man who was being attacked by a violent mob. However‚ he later died in hospital.

Officers were too late to save another man who lay dead one block away. His bloodied body lay on a heap of potatoes‚ spilled from a nearby street stall during the chaos of the attack.

Rumours of an abducted child are at the centre of a brutal case of alleged mob justice that claimed the lives of two men in Pinetown on Tuesday night.
News
4 years ago