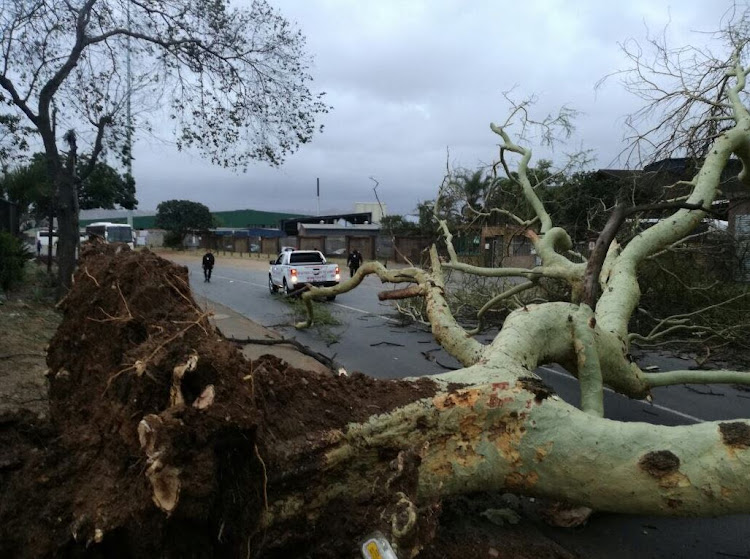 One person was electrocuted to death and another injured after a tree collapsed on electricity wires during the violent wind storm which swept through KwaZulu-Natal on Saturday.

Two members of the Zungu family‚ in the Richards Bay area‚ fell victim to the gale-force winds and rain that caused extensive damage throughout the province‚ from the south up to the north coast as well as inland.

“This tragic incident which took place on Saturday is yet another reminder of the unnecessary loss of life that our province suffers every year as a result of inclement weather conditions‚” said Nomusa Dube-Ncube‚ KZN MEC for Cooperative Governance and Traditional Affairs (Cogta).

At least five people were injured in Durban as gale force winds whipped through KwaZulu-Natal on Saturday afternoon and evening.
News
4 years ago

“Our disaster management teams are in contact with the family to provide the necessary support.”

While mopping up operations were under way in several areas‚ Dube-Ncube warned that the province was expecting to be battered by more rain.

“We have also issued a warning to communities that more rains are expected which might lead to localised flooding along the province’s coast today and along the north coast tomorrow.

“This warning comes as the province has commenced with mop-up operations following three days of heavy rain and gale force winds...”

Residents living in low-lying areas have been warned not to cross rivers and bridges‚ to avoid being swept away.

“Our disaster teams have logged and responded to several incidents in Ugu‚ on the south coast‚ Durban‚ Richards Bay and Ladysmith.”

Cogta’s interim assessment of the damage showed houses with their roofs ripped off and fallen trees damaging cars‚ homes and causing blocked roads.